“Atomic Liquor” by Tom Hilton is licensed under CC BY 2.0

Entering the decade of the 1950s, Las Vegas was still a small town with only 24,624 residents in the entire surrounding area.

In rapid succession, iconic names such as the Desert Inn (1950), Sahara (1952) and Sands (1952) were built, and by 1954, more than eight million visitors were spending over $200 million annually for 24/7 gambling, adult fun and superstar entertainment at the exciting mega-resorts that lined the town’s new one-of-a-kind neon-drenched “Strip.”

It was a classic example of what Mister Webster defines as a “boom” – “a time of great prosperity and rapid economic growth.”

Another Boom for Las Vegas

While fun and excitement took place in the city, serious business was about to be seen and heard nearby. It also qualified for Mister Webster’s primary definition of a boom.

Testing began with detonation of an air-dropped one-kiloton bomb above a secreted area in the desert site known as Frenchman Flat. It was the first of 100 such atmospheric above-ground tests followed by another series of 928 underground tests over the next four decades. 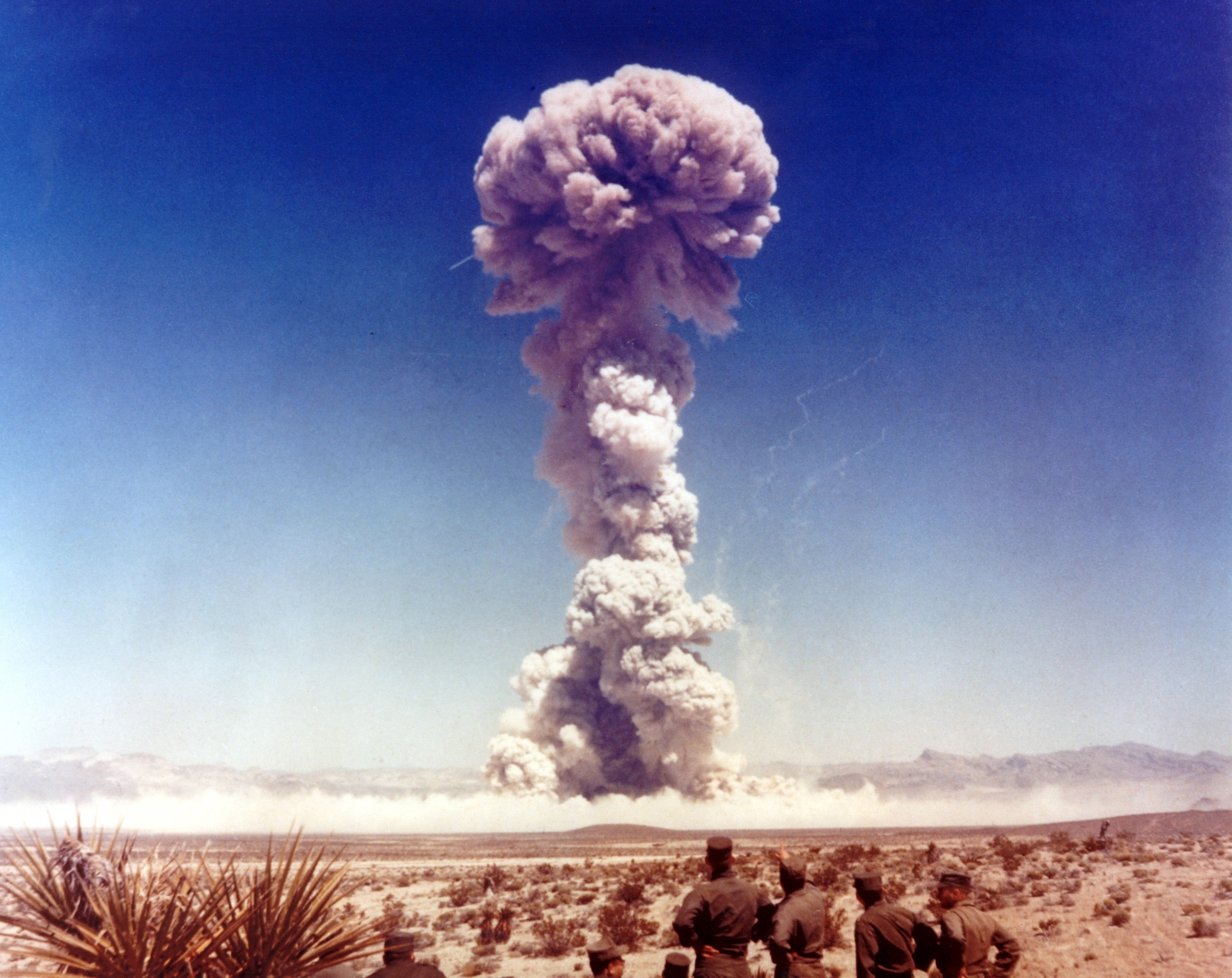 “The Atomic Energy Commission was under a lot of pressure to announce testing schedules, which it did,” he states, “and as a result… inadvertently… it also ushered in an era of ‘Atomic Tourism’ that lasted pretty much through 1957.”

“Most above ground tests were detonated in the early morning hours,“ Morgan adds, “silhouetted against a dark sky for optimum photographic and cinematic studies.”

Bursts of light and towering mushroom clouds from the atmospheric tests could easily be seen off in the distance. In 1952 and 53, Nevada’s tests were also being shown on national television and featured in popular magazines. 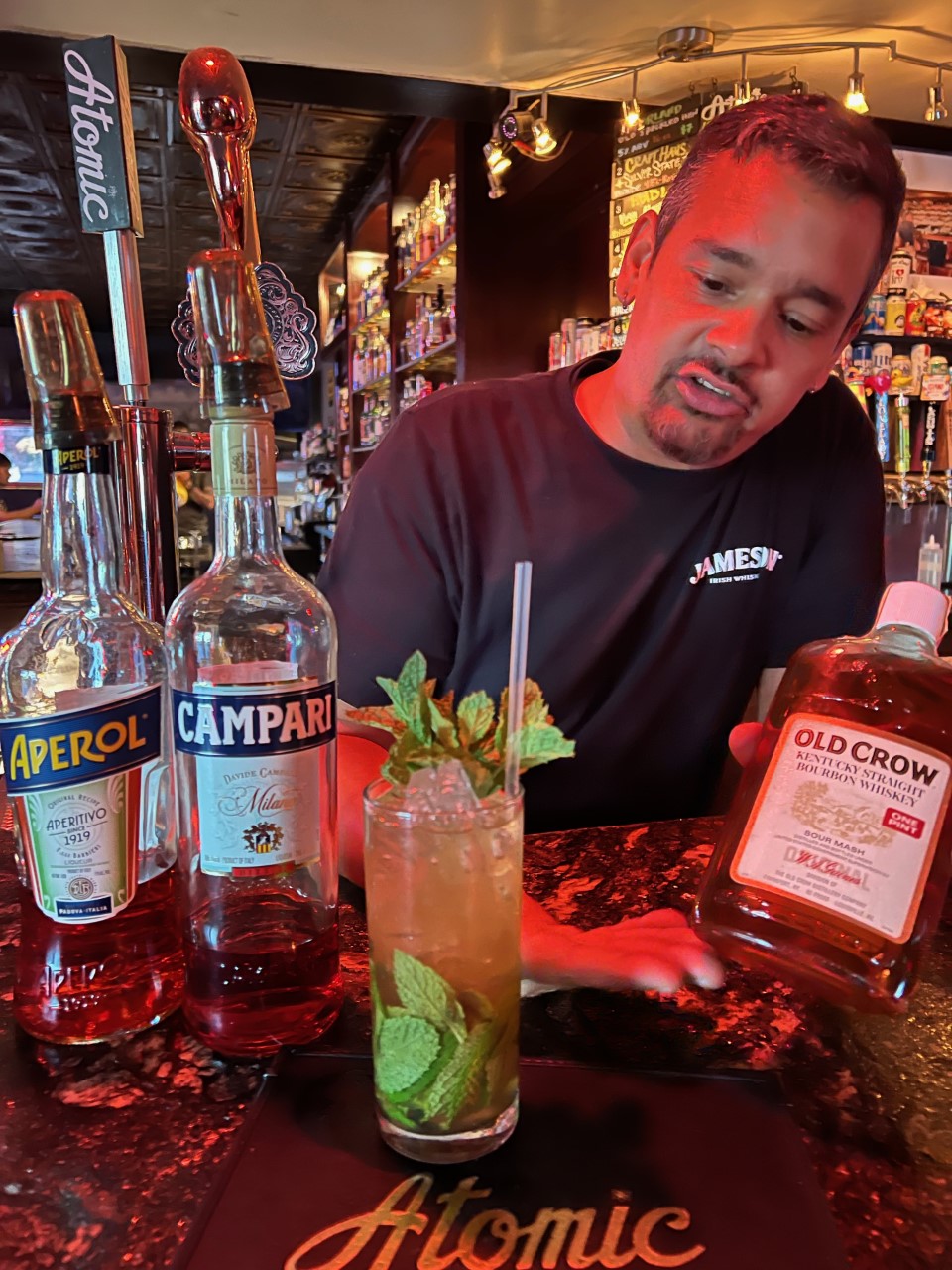 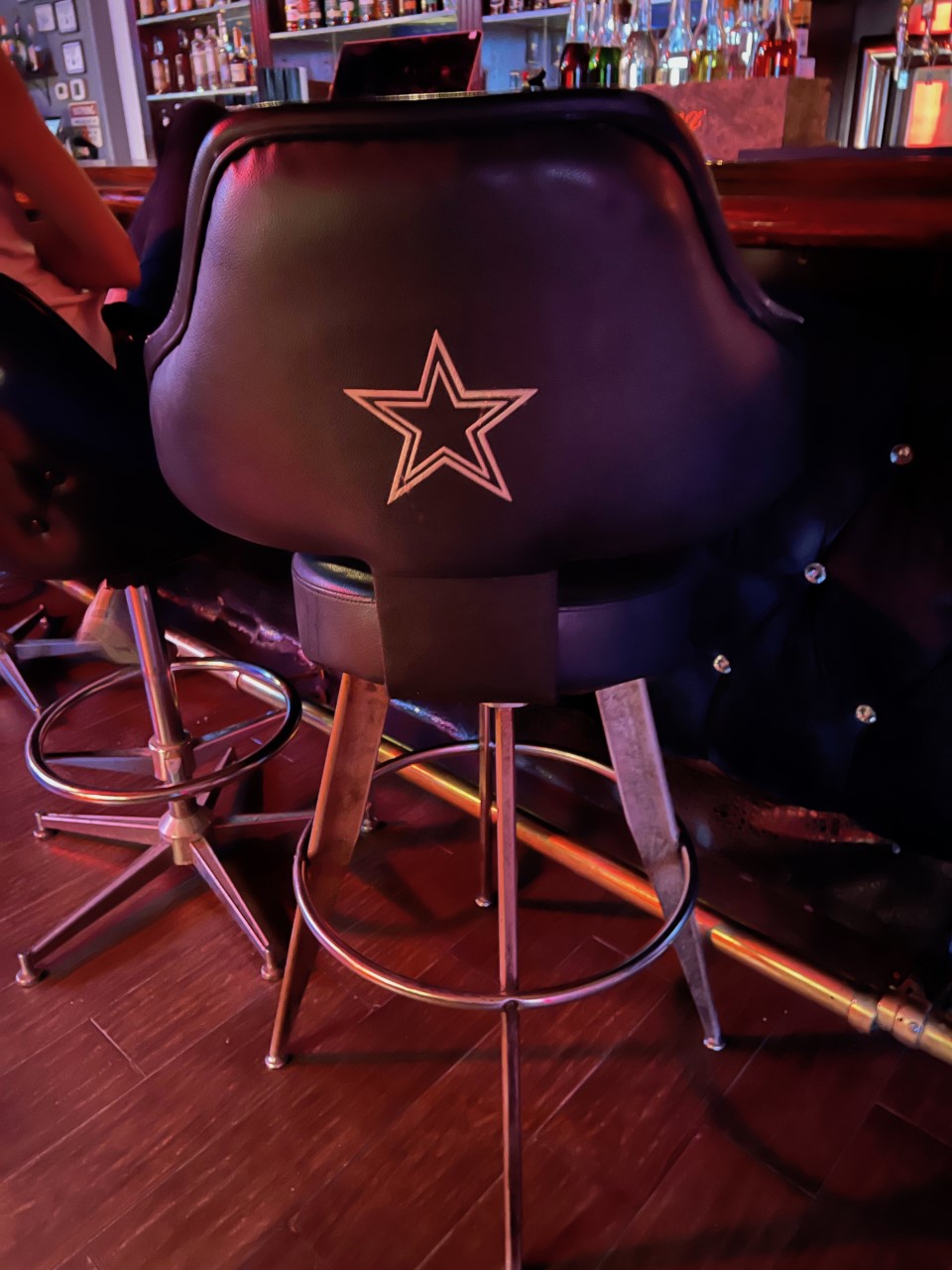 Soon, one’s plan to have a blast in Las Vegas also included… seeing a blast. Calendars throughout the city listed detonation times and the best vantage points to view the tests.

Atomic Tourism in Vegas continued from the mid-1950s until mid-1962, with only one brief moratorium. In August 1963, a multi-nation Limited Test Ban Treaty officially put an end to atmospheric surface tests and any future testing was to only be underground.

Off the Beaten Path

During the heydays of vintage Las Vegas and the era of Atomic Tourism, a small unassuming restaurant on a not-yet-popular stretch of East Fremont Street had no idea it was poised to become a lasting legacy of the famed Atomic days of yesteryear.

During the late 1940s, Las Vegas residents Stella and Joe Sobchik took over a small restaurant that Joe’s Mother, Virginia, had built on some property she had inherited.

Virginia’s Café was located at 917 East Fremont Street, many blocks away from the activity downtown and miles away from the glitz and glitter of the Strip.

For a few years, Stella and Joe dutifully manned the grill and cooked for the locals. It was also during this time that the Atomic tests began taking place… and creative customers – often with secreted alcoholic drinks in hand – climbed onto the roof for a good unobstructed view of the mushroom clouds climbing high in the sky.

Eventually tiring of the restaurant biz, they decided to close the café and purchased a license for an easier-to-operate liquor store instead. Based on the town’s “theme du jour,” they named it Atomic Liquors.

In June 1952, a hard-to-get liquor “pouring” license also became available and was purchased when Lido Lounge closed in the nearby El Cortez Hotel and Casino. It allowed Atomic Liquors to augment its takeout trade with the sale of in-house “over the bar” beer, wine and mixed drinks. It also created a new dual category called a “Tavern License” and Atomic Liquors was issued the very first one… bearing license #00001.

On April 20, 1954, a Las Vegas “Business License” was issued for Atomic Liquors as well. It listed the early phone number 7371. 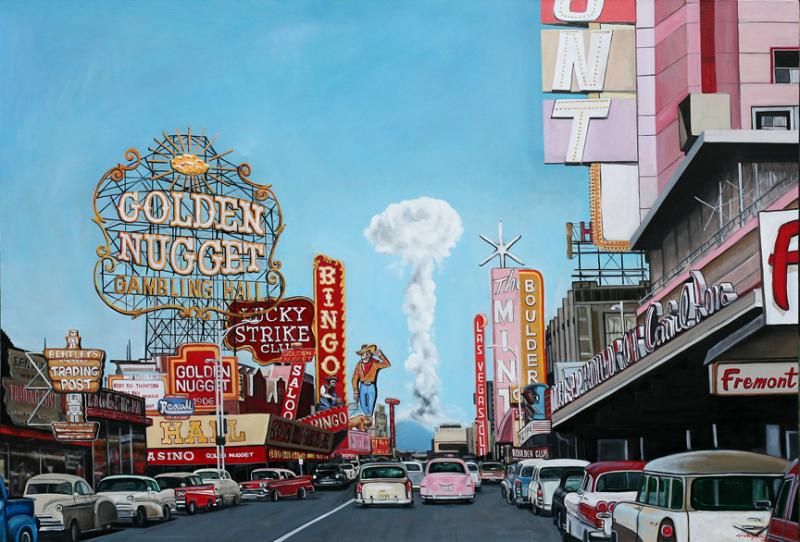 Who’s Who of Famous Customers

Word soon spread of the comfortable atmosphere found in this little neighborhood bar, and Atomic Liquor’s steady clientele of locals began to see well-known celebrities come in as well who were looking to avoid the attention they attracted on the strip or Downtown.

Any given night might find the Rat Pack downing martinis in the wee small hours after Sinatra’s performance at the Desert Inn, Sammy’s show the New Frontier or Dean and Jerry’s gig at the Flamingo.

Sandwiched in at the bar might also be regular visitors like Clint Eastwood, Roy Rogers and the Smothers Brothers trying to look inconspicuous.

In her memoir, Barbra Streisand mentioned how she loved coming in late nights to hang out and play pool after her shows at the International Hotel. She always sat in the same seat at the corner of the bar and today, her favorite bar stool is proudly adorned with a big white star.

Hunter S. Thompson was another regular who hung out while in town on various writing assignments for big national newspapers and magazines. He covered many Vegas events – like the famed Mint 400 Off-Road Races – and is best known for writing “Fear and Loathing in Las Vegas.”

He also liked to drink and his beverage of choice was Old Crow Bourbon Whiskey. One of Atomic’s famed house drinks today is a special cocktail – called the “Hunter S. Mash” – made with Old Crow Bourbon in honor of the legend.

Atomic Liquors has also been featured in many famous movies, such as Roy Rogers’ 1946 “Helldorado,” Clint Eastwood’s 1977 “The Gauntlet,” Joe Pesci’s pen-in-the neck scene in Martin Scorsese’s “Casino” (1995) and more recently the car crash scene in “The Hangover” (2009). Television credits include “The Twilight Zone” and A&Es realty crime series “The First 48,” to name but a few.

One of the best-known TV episodes is Anthony Bourdain’s “Parts Unknown” that aired live from Atomic Liquors on Sunday evening, November 10, 2013. The season finale, titled “Last Bite,” was a one-hour show featuring famous chefs and celebrities along with patrons of the popular downtown bar.

This past June, Atomic Liquors introduced the first “Anthony Bourdain Day” as an annual tribute featuring a special “Atomic Bourdini” styled after his favorite cocktail, the Italian Negroni. 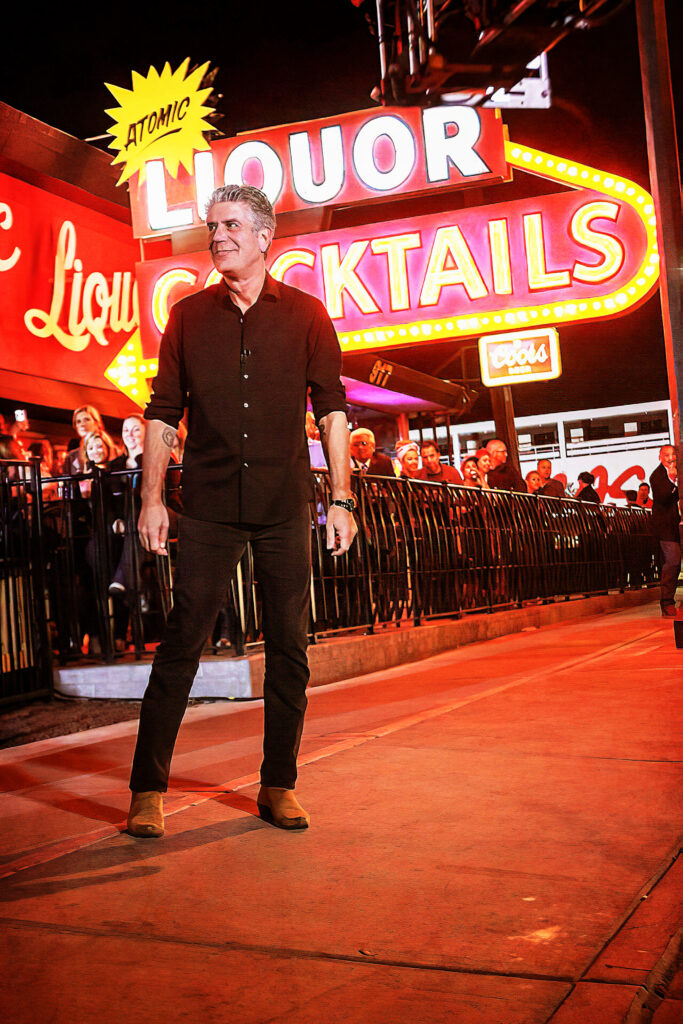 Atomic Liquors was only closed for a brief period in 2011, when – after nearly 60-years of continual operation – original owners and on-site personalities, Joe and Stella Sobchik, passed away at 91-years of age and just three months apart.

“Atomic was purchased shortly afterward from the Sobchik’s son, Ron,” notes Manager, Chris Gutierrez, “and it reopened under new ownership on Thursday, June 20, 2013.”

“While there were a few minor updates here and there,” states Gutierrez, “the new owners were one-hundred percent dedicated to keeping everything just as it was back in Atomic’s heyday in the 1950s.”

And so it is. Take a few steps into the bar and you are immersed in vintage Vegas to the max. The room is dimly lit and the first thing you notice is that there are no gaming machines built into the bar. As a result (gasp) people are actually talking to each other.

In place of the pool tables, which are long gone, big booths and tables add a welcoming coziness. Just past Streisand’s “starred” favorite bar stool and must-have juke box, are double-doors leading to an expansive outdoor patio that seats up to 200 on a busy weekend.

If you’re looking for a touch of that “Cheers… where everybody knows your name” vintage Vegas vibe, check out the town’s oldest free-standing bar. Pull up one of the original bar stools, say “hi” to the friendly bartender and order a specialty house cocktail.

“Atomic is a nod to the past with our face towards the future,” adds Gutierrez, ‘Seventy-years and counting.”

Today’s Atomic Liquors truly is… a “blast from the past.”

Don Logay is an award-winning journalist and former Editor-in-Chief of three national magazines. Today he writes luxury lifestyle articles for numerous publications. He can be reached at (949) 240-4444 or press@donlogay.com.