When Vernon and Gladys Presley had a child in their small, two-room home in Tupelo, Mississippi, they never could have dreamed that their newborn son – given the father’s middle name (a rare choice for that day and time… said to be of Scandinavian origin meaning “all wise”) – would one day be heralded as “The Best-Selling Solo Music Artist of All Time” by the Guinness Book of World Records.

Nor could they have ever imagined that, in just 42 short years, their child would sell over 500 million records worldwide, or that he would become the undisputed most often imitated entertainer in history or that eventually half a million people a year would come to Memphis, Tennessee just to visit the Graceland Mansion he called home.

On Tuesday, January 8, 1935… a fitting announcement could have been, (drumroll) “Ladies and Gentlemen… Elvis has entered the world!”

The 1950s and 60s were the heydays of vintage Las Vegas. It was the newly created neon mecca in the desert that beckoned 8 million people a year to spend $200 million annually on 24-hour gambling and great entertainment, along with quickie weddings and even faster divorces.

In an era when tuxedoed mega-stars like Frank Sinatra, Dean Martin and the “Rat Pack” owned the town and big names like Tony Bennett and Wayne Newton crooned hits like “San Francisco” and “Danke Schoen” at famous Casino Hotels like the Sands, Dunes and Riviera… a new kid came on the scene.

A 21-year old singer, named Elvis Presley, made his first appearance at the New Frontier Hotel and while Vegas regulars didn’t really “get” this new Rock ‘n Roll upstart – gyrating around in a sports coat and loafers – he still packed them in nightly with sell-out shows.

Soon, some of the biggest names of the day began to take notice. One notable – that also greatly influenced Elvis – was Liberace.

In 1956, he came to see Elvis Perform. Shortly afterward, Elvis reciprocated and went to see Liberace’s show at the Riviera. It is reported that, at one of these two visits, they talked backstage and Liberace told Elvis, “You’re a great singer… really good… but you need some glitz.”

Genesis of “The Look”

For a period of time, Elvis came and went, doing concerts and shows in other locations along with a two-year stint in the Army. After also appearing in a number of less-than-stellar movies, both Elvis and Colonel Tom Parker – who managed Elvis’s career – were ready for something big and new to re-energize their drive toward major stardom.

During the “making movies” era (33 films between 1956 and 1972), the Colonel took Liberace’s advice and contacted Nudie Cohen – a Rodeo Tailor in North Hollywood – for some “glitz” ideas.

Nudie designed a flashy gold lame’ tuxedo. Unfortunately, the delicate fabric did not hold up well for the famed Elvis knee-slides and other signature stage moves. It also didn’t really look “cool” and after a few performances, Elvis ditched the gold suit idea for good.

A big break came on December 3, 1968 with the highly-promoted televised NBC Christmas Special, “Singer Presents… Elvis” – more commonly known as the “Comeback Special” and the first of his most notable historic shows.

Recorded earlier in the year at the NBC Studios in Burbank, California, Elvis took the stage in a striking, tight black leather outfit – created by Hollywood designer Bill Belew – and rather than performing Christmas songs as one would expect, he sang his greatest hits along with all of the famous shakes, gyrations, knee-drops and facial expressions he was known for.

At the end, wearing a striking white three-piece suit – also specially designed by Belew – he closed with his signature soft-spoken “Thank you. Thank you very much.”

The show topped the week’s Neilson ratings and – while it both re-launched his singing career and marked a return to live performances – the dramatic outfits also served to recall Liberace’s comment about the need for “glitz.”

His earlier suggestion launched a second effort – this time for mega-costuming – that ultimately succeeded in creating the famous trademark jumpsuits that would forever set Elvis apart from all others.

Elvis returned to Las Vegas in 1969 to perform in the International Hotel’s 2,000 seat Showroom – the biggest venue in Vegas at the time – and over the next five years and 837 shows, he entertained 2.5 million people.

I was among those who saw Elvis perform live at the International. In late 1972, I sat at the edge of the stage and watched as he sang for over an hour accompanied by his TCB Band, a 30-piece orchestra and chorus of girl singers. It was an incredible show and life experience I will never forget.

The eventual famous jumpsuits evolved in stages by trial and error. After a few two-piece designs and some this-or-that, Belew began incorporating his favorite design elements one at a time. 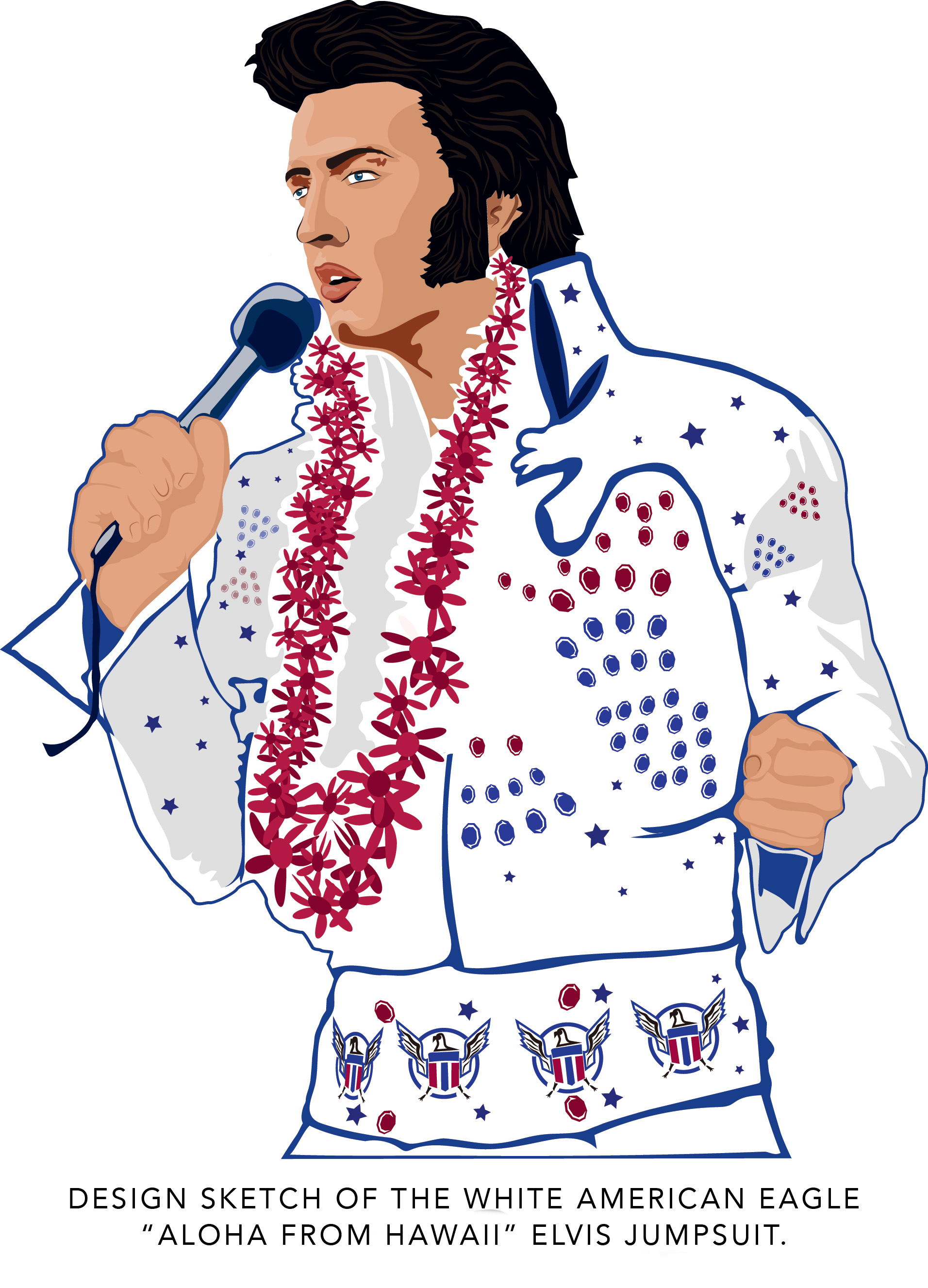 The first key element was choosing the best fabric. Bill Belew contacted a friend who worked for the Ice Capades and learned of a unique material worn by the skaters – a heavy stretch gaberdine called “Ski Cloth” – that was only made by one company in Milan, Italy. Belew’s friend made the contact and this fabric became the basis for all future Elvis jumpsuits.

As Belew’s designs evolved, he also brought in another talent from New York for ideas and suggestions. Gene Doucette was a young designer gaining recognition for his artistic use of studs, grommets and jewels to create amazing “bling” for costumes.

Together, and through experimentation, they created the sought-after “glitz” that Liberace suggested. Elaborate designs eventually included lavish embroidery. They even tested fabric colors to see which worked best with stage lighting. It was white.

Over the years, Elvis had hundreds of jumpsuits made with incredible designs. His favorites were the Peacock, the Pinwheel and the Sunburst. But his absolute most favorite was the iconic red, blue and gold American Eagle white jumpsuit that Elvis wore for the 1973 “Aloha from Hawaii” TV concert…  the second of his most historic shows. 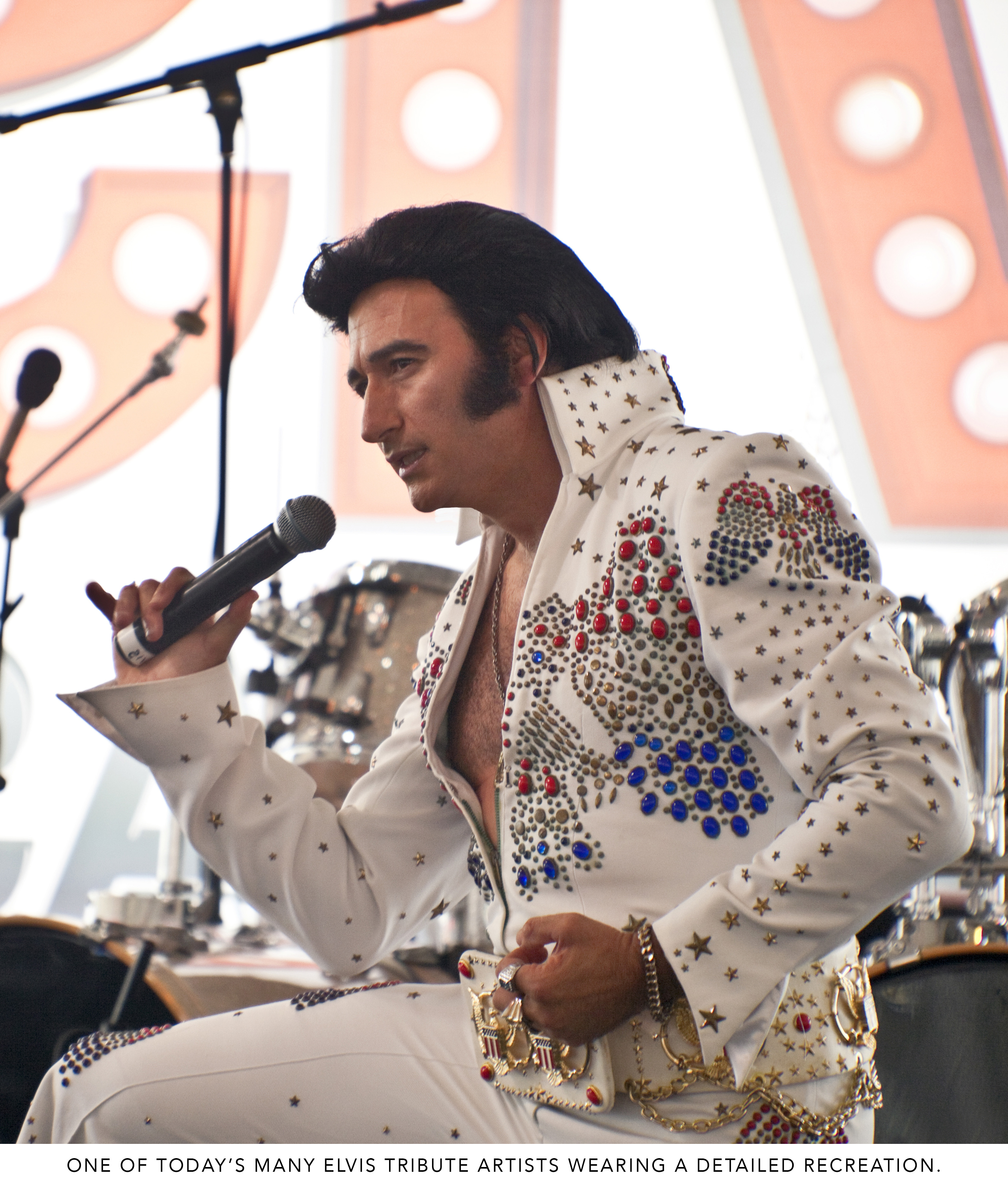 Tribute to the King

Just 51 day later, Elvis Presley passed away at his Graceland home in Memphis.

At the time of his death, there were only a handful of Elvis tribute artists in and around Las Vegas. Today, and some 45-years later, there are an estimated 250,000 to 400,000 Elvis impersonators found in virtually every country around the world. Some are good performers, with looks and voices that approximate that of Elvis, while others defy both reason and imagination.

He is the undisputed most imitated performer of all time.

My Second Brush with Elvis

Rick Mars – a close friend who was the drummer and creator of the famous drum solo on the original recording of “Wipeout” – contacted me and said he was in possession of the Elvis jumpsuit that Kevin Costner wore in the movie, “3,000 Miles to Graceland.”

He acquired it while shooting a movie at the same studio where the film was made. It was one of two jumpsuits on display in their lobby and he requested it as part of his fee.

He had only performed in it a few times and thought I might be able to offer it to one of the many Elvis tribute artists here in Las Vegas. I said “sure.” 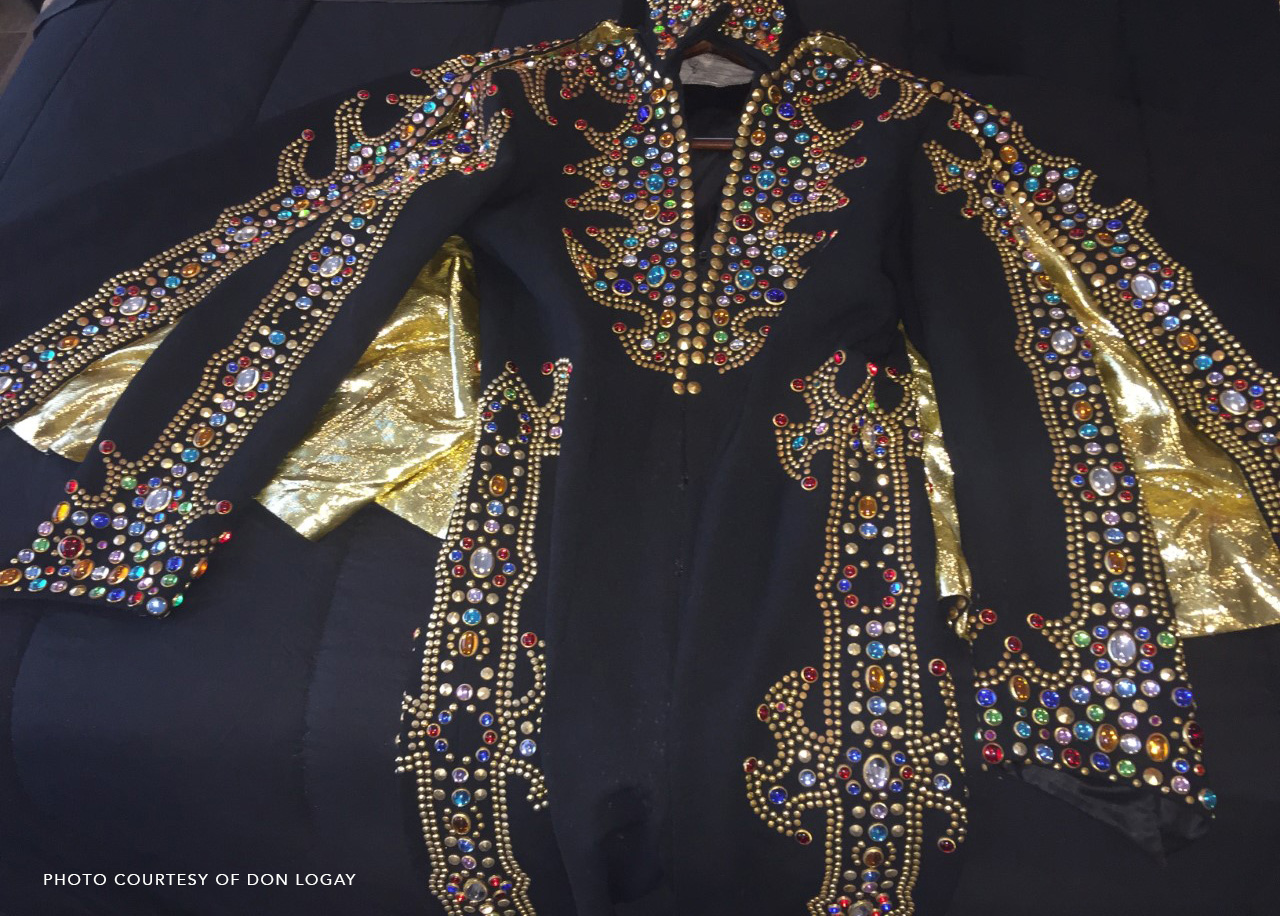 A few weeks later, a black jumpsuit and cape with gold lining arrived, totally bedazzled with studs and jewels weighing about 40 pounds. I wondered if it really was Kevin Costner’s outfit from the movie. Time for a little research.

The label said “B&K Costumes” and you would think the number one company for making totally authentic Elvis jumpsuits would be in Hollywood or Vegas… but no. I soon discovered the world’s foremost company for these outfits is actually located in Clarksville, Indiana – 1,875 miles away from Las Vegas!

B&K Enterprises Costume Company, Inc. (www.b-k-enterprises.com) is a small shop located in Charleston, Indiana… with a mailing address in nearby Clarksville. It was started in 1980 by Butch and Kim Polston, a young couple that were simply devoted Elvis fans.

Shortly after Elvis’s death, Kim asked Butch, “If you could have anything that belonged to Elvis, what would it be?” Expecting his answer to be one of his cars, he surprised her with, “One of his jumpsuits.”

On a whim, they decided to attempt making a jumpsuit. They studied photos of those made for Elvis and – with no tailoring or sewing skills – crafted four surprisingly good look-alikes. As die-hard Elvis fans, they soon headed off to Memphis to attend an annual Elvis Convention at Graceland.

The couple’s four Elvis jumpsuits were a smash hit at the Graceland meet-up and one attendee insisted on purchasing them for $500 apiece – big money for a young couple in 1980. Returning home, they paid some bills and decided there was money to be made in making these jumpsuits.

In 1980, they created B&K Enterprises and set out to begin making jumpsuits. While other start-ups were creating unauthorized knock-offs of varying quality, Butch and Kim wanted to do it right… and took the time to actually find, and contact, both Bell Belew and Gene Doucette – the original designers and fabricators of jumpsuits for Elvis.

They received a surprisingly warm welcome when they asked for permission to recreate their jumpsuits and – as they were the only ones to do so – were given the actual copyrighted patterns and designs, as well their cooperation and participation in producing authentic recreations.

They also became lifelong friends, and while Bill Belew passed away in 2008, Gene Doucette still works directly with B&K and to this day still does the authentic embroidery work on all of their jumpsuits.

So… is it Really Costner’s?

Kim and Butch were extremely helpful and quite cooperative in helping me verify that the jumpsuit I had in my possession was really made for, and worn, by Kevin Costner.

Without going into a lot of detail, we used both photos and garment measurements to determine that it was indeed Costner’s … and not one made for his stunt double. Once confirmed, they also graciously provided a letter of authenticity.

Rick Mars initially suggested contacting some of the many Elvis tribute artists in Vegas, to see if they might be interested. However, after many expressed interest, it eventually went to an avid Elvis fan and memorabilia collector in Irvine, California.

I felt a little sad as I carefully packed the cape and jumpsuit. I was saying goodbye to a bit of Elvis connection that I was sure to miss.

As I walked out the door, headed for the FedEx office with the package under my arm, I couldn’t help thinking to myself, “Ladies and Gentlemen… Elvis has left the building.”