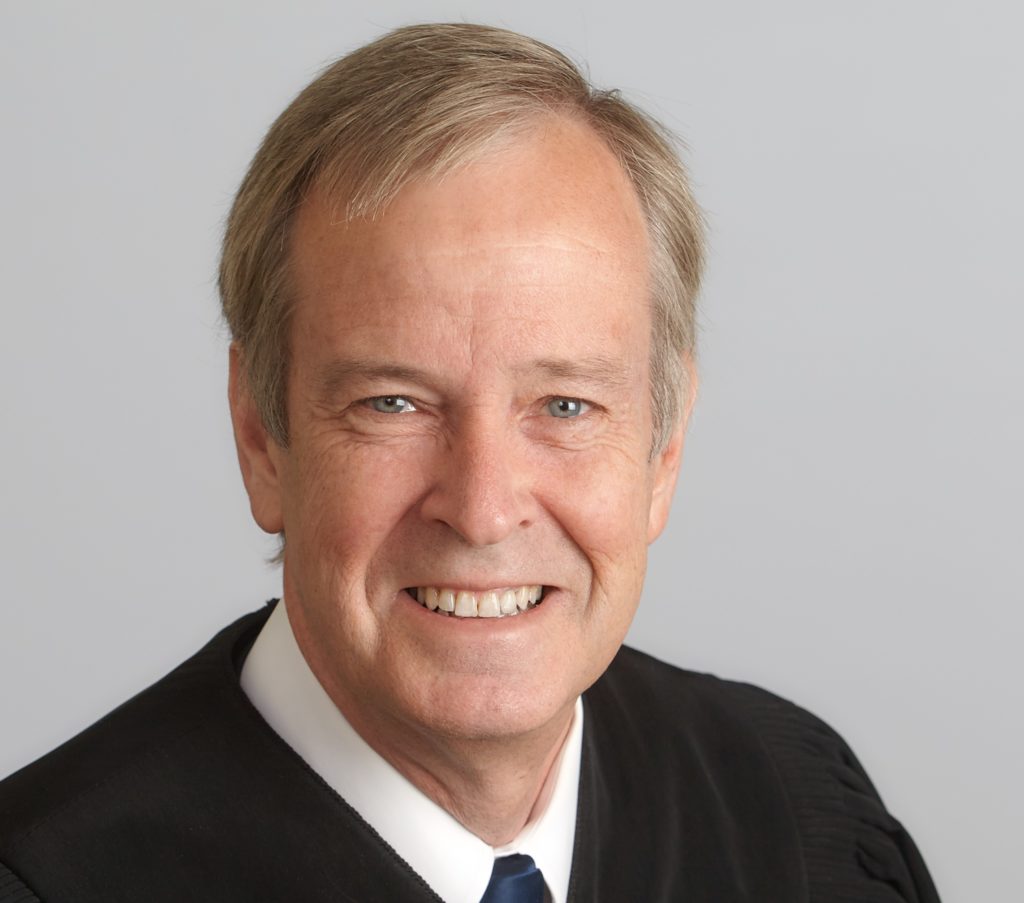 Eric Johnson is the District Judge for Department XX for the Eighth Judicial District, handling criminal and civil matters. Governor Brian Sandoval appointed him as a judge in 2015, and voters elected him in 2016.

Prior to his appointment, Judge Johnson was a Special Attorney with the Department of Justice, Organized Crime and Racketeering Section, and an Assistant United States Attorney with the U.S. Attorney’s Office for the District of Nevada, serving 10 years as Chief of the Office’s Organized Crime Strike Force and then two years as overall Chief of the Criminal Division. He championed initiatives which brought the U.S. Attorney’s Office together with local, state and federal law enforcement agencies to more effectively prosecute and keep guns out of the hands of violent criminals and drug traffickers, to target and prosecute the leadership and most violent members of street and prison gangs, and to successfully indict child exploitation cases involving child pornography and the trafficking of children for prostitution.

During his over 30 years with the U.S. Attorney’s office, Eric Johnson was twice honored as one of the nation’s top prosecutors and received international commendations for his work prosecuting multi-million-dollar international money laundering operations.
Before coming on the bench, Judge Johnson also was a regular instructor of trial advocacy and strategy at the Department of Justice’s National Advocacy Center and frequent presenter on criminal law and litigation throughout the United States and with foreign law enforcement programs. He has taught Ethics and Professional Responsibility as an Adjunct Professor at the UNLV Boyd School of Law.
Judge Johnson served as one of the first four judges for the Court’s Homicide Panel and was elected in 2020 as the Eighth Judicial District Court Civil/Criminal Judge Representative to the Judicial Council of the State of Nevada.

Eric Johnson earned his B.S. degree from Emporia State University with a 4.0 GPA and his J.D. degree from the University of Kansas School of Law where he was a member of the law review and Order of the Coif. He graduated 2nd in his law school class. He has also taught Ethics and Professional Responsibility at the UNLV Boyd School of Law.

Eric and his wife have two daughters and have been active members of our community for 30 years. Judge Johnson and his wife were inducted into Green Valley High School’s Wall of Fame for their work over a 15-year period with the school’s women sports programs. A member for 25 years in Green Valley United Methodist Church, he has served as president and trustee of the church’s corporate body and as chairman of the church’s Staff Parish Relations Committee. He also regularly participates in graduation programs for Hope for Prisoners.

(1) What are the biggest changes you think we need to make to our justice system?

On the civil side, the greatest obstacle to accessing equal justice is the inability of low and moderate income Nevadans to obtain legal representation or to adequately represent themselves in the courtroom. The Court has taken the initiative in expanding the services of its Self-Help Center for self-represented litigants and through working with the State Bar to encourage greater pro bono work from the legal community. On the criminal side, we need to guard against possible sentencing disparity. The Court needs to review sentences between judges for various criminal conduct to better ensure consistency into the future. The Court also needs to also evaluate the effectiveness of the Clerk’s Office in summoning jury voir dire panels which are representative of the community. Additionally, I believe the Court needs to be more active in ensuring the bail system is used for its intended purpose and not for punishment before a defendant is convicted. To better ensure bail and pretrial detention are used for ensuring the defendant’s appearance and limiting a defendant’s potential danger to the community, the Court has implemented a fact-based risk assessment scoring system for judges to use in the process. Finally, I believe the Court needs to take concrete action to improve and standardize the criminal jury instructions. The current instructions are antiquated and difficult for modern jurors to understand and appreciate what they must find to convict a defendant. I am the Eighth Judicial District Court regional representative to the Judicial Council of the State of Nevada which considers these issues and potential improvements in the Courts systems.

(2) What is your philosophy on “judicial activism”, and what effect should judges have in setting or promoting public policy?

The judiciary is responsible to interpret and apply the law to the facts of the case. The judiciary does not make law, as such is the responsibility of the legislature. In general terms, I don’t view the judiciary as responsible for setting or manipulating public policy. I view my responsibility as a judge at the District Court level to apply the law fairly and evenly to all the parties in a case, considering their legitimate interests, goals and motives to the extent the law allows, and, whenever possible, to assist in bringing the parties together to reach a joint resolution to a matter. However, in a broader sense, I do believe the judiciary does have a responsibility to inform the public and seek consideration on matters of policy directly relevant to the judicial system. On the civil side, expanding opportunities for low and moderate income Nevadans to obtain legal representation is crucial to ensuring equal justice for all Nevadans. On the criminal side, the Court must confront issues of sentencing disparities and bail reform. The Court must also promote the availability and expansion of counseling and treatment programs for defendants with drug addiction and mental health issues. I believe judges need to be proactive in bringing about these changes and gaining public support for improvements.

I think professional and community involvement is important as a judge to stay in touch with the community and issues and concerns of its citizens. My wife and I have been significant supporters of Green Valley High School since our oldest daughter first went there in 2002. We continued to work with the volleyball program after our daughters graduated and, over a 14 years span, used the program to raise close to $100,000 in support of the women’s sports program. Both Susan and I were honored by the school in 2015 with our induction into the school’s “Wall of Fame” for our exemplifying of the school’s motto of commitment to excellence: We were the third parent group in the schools 25-year history to be so honored. I have been active with our church, Green Valley United Methodist Church, since 1996. I am currently Chairman of the Staff Parish Committee, which handles personnel matters at the church. Previously, I served for three years as President of the Church’s corporate entity and Trustee, responsible for the physical facilities of the church. My wife and I also took an active role in the Church’s youth missions projects and headed up and organized fundraiser Valentine’s Day dinners for the youth, raising $7,000 and $9,000 in two different years for youth mission projects. I have worked over the last ten years with Bobby and Sandy Ellis and their efforts to provide new shoes and toys to children in at risk elementary schools. I have played Santa for thousands of school kids who Bobby and Sandy have helped. As a judge, I have regularly spoken at Hope for Prisoners graduation ceremonies and led its graduates in their oath.