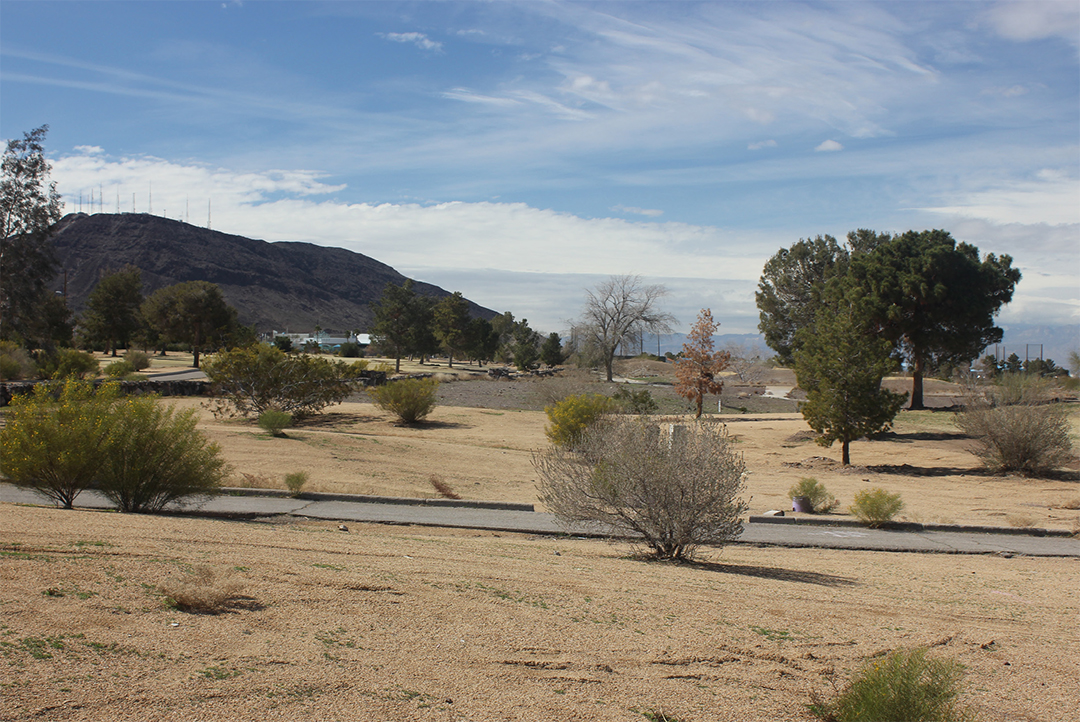 The once-green, lush golf course has a lot more dirt visible these days. By the end of February, Henderson’s historic Black Mountain Golf and Country Club had been closed a full three months. But what this land will look like years from now is what worries local residents the most.

“I was born and raised here, and we are trying to save the neighborhood,” says Val LaPorta, a resident who has been vocal in fighting high-density housing on the site.

One proposal put forth by the Black Mountain Golf and Country Club operators called for around 1,800 houses on the 200-acre site, with almost all of those houses being on a portion of land near Horizon Drive and Greenway Road.

Neither of those cross streets could handle those infrastructure demands, says resident John Stevens.

“Horizon and Greenway are not large streets like Eastern (Avenue). It would overwhelm our schools, as well,” the resident adds.

Denell Hahn leads the Black Mountain Neighborhood Association, which has around 200 people involved with it. She concedes that some development will come to the course, but wants to ensure that what’s built on the site won’t destroy the neighborhood many residents have lived in for more than a half century.

“We are almost all life-long residents, and we know each other’s parents and children, although we welcome and love the new residents,” Hahn says of the association.
No fees or dues are part of this association, which was formed only in 2017, she adds. Members often wear the green “Save Black Mountain” t-shirts to neighborhood and Henderson city meetings.

“We just want to preserve our neighborhood,” Hahn maintains.

While Hahn has not personally experienced any rodent infestations since the golf course’s closure in late November, others haven’t been as lucky, she points out. Another resident said they “have had their air conditioner cord chewed off” by a rat, Hahn offers as an example.

A loud and contentious neighborhood meeting on Feb. 11th, at the Black Mountain Golf and Country Club, resulted in a slew of residents complaining of mouse-and-rat infestations as a result of what they claimed was reduced watering on the closed golf course. Others claimed to be also swarmed by rabbits. A few maintain that even coyotes come by their property now.

“Based on the time of year it is (the winter), we wouldn’t be watering more than we are now (if it was open),” Carlyon told Vegas Legal Magazine in a late February interview.

Carlyon says there’s really not a lot they can do about the stray rabbits, as it is cruel and illegal to poison rabbits. “We are not going to do that.”

An employee of a neighborhood home-improvement store, which is nearest to the golf course, recounted seeing “double the number of people” purchasing mice-and-rat traps, when compared to the same time last year, he said in February. The employee, however, didn’t know the exact cause of the surge in pest-control products.

The Black Mountain Golf and Country Club went into bankruptcy reorganization in 2017, and closed its doors near the end of November of last year. Once a thriving course, the course fell victim to a perfect storm of events, says Carlyon.
“Golf courses all over the country are dying, and Millennials aren’t playing golf that much,” she laments.

In addition, the Great Recession, which hit in late 2007 and lasted for years, caused the Black Mountain Golf and Country Club’s membership to drop by nearly two-thirds by the time of its closure, Carlyon adds.

Prior to the recession, the course had around 300 members, but by the time of the November closure, that membership total had dropped to just over 100, she explains.

“Some other golf courses can survive, after their membership declines, because they are supported by (homeowners) association fees. But we didn’t have an association that paid us fees,” Carlyon adds.

Residents are being unreasonable in their demands, the attorney contends. She points to an earlier – and failed — mediation between some residents, Black Mountain Golf and Country and the city.

“They want to have a big, lush, expensive golf course that somebody else has to pay for,” Carlyon states.

Founded in 1957 as one of the first golf courses in Southern Nevada, the Black Mountain Golf and Country Club was “non-moneyed and non-profit,” according to an April 2018 bankruptcy filings. Bordered partially along Horizon Drive and Greenway Road in Henderson just west of Boulder Highway, the golf course is an integral part of the community that surrounds it.

The 27-hole golf course is on 200 acres of land, and also includes a club, shop and banquet facilities.

The course’s expansion was made possible due to the acquisition of land from the Bureau of Land Management (BLM). The land had been purchased at a 10 percent discount from the BLM due to a reversion clause requiring the land to be used for a non-profit use, according to Candace Carlyon, the attorney for the Black Mountain Golf and Country Club.

At the present time, the BMGCC is in the process of repurchasing that reversion clause or paying back that 10 percent discount in today’s dollars.
Henderson City Councilwomen Gerri Schroder, who represents the ward which includes Black Mountain, says the city is doing what it can to ensure the golf course is maintained properly during its closure. The city developed a plan for the course’s operators to follow.

After residents complained about the course’s condition at a Feb. 19th Henderson City Council meeting, a code enforcement official inspected the course and found an active code violation, Schroder adds.

The Henderson City Councilwomen agreed with residents that the previous proposal for 1,800 houses on the site of the course was way too high a density for the neighborhood. She opposes that many houses on the site.
That said, Schroder cautions that the city of Henderson is not interested in operating another golf course.

“The city is not going to buy the property,” she adds.

Black Mountain Golf and Country Club has also received approval from bankruptcy court to remove and sell some trees to Wynn Resorts.

That is just another sad reminder of the fate of the Black Mountain Golf course for Denell Hahn and other residents.

Hahn says she “loves her rabbits,” but instead is more worried about massive amounts of people invading the neighborhood.

Now, the long-time resident just hopes to mitigate the damage done to the neighborhood. Hahn wants to see a much-smaller golf course maintained on the original “Founders 9” portion of the property. The course, ideally, would have natural grass and a real clubhouse.

“We’d like to see if they would come up with something we could live with,” Hahn said of Black Mountain Golf and Country Club’s operators.
“But everything has been terrible so far.”

Valerie Miller is an award-winning Las Vegas Valley-based journalist. She can be reached at (702) 683-3986 or valeriemusicmagic@yahoo.com.