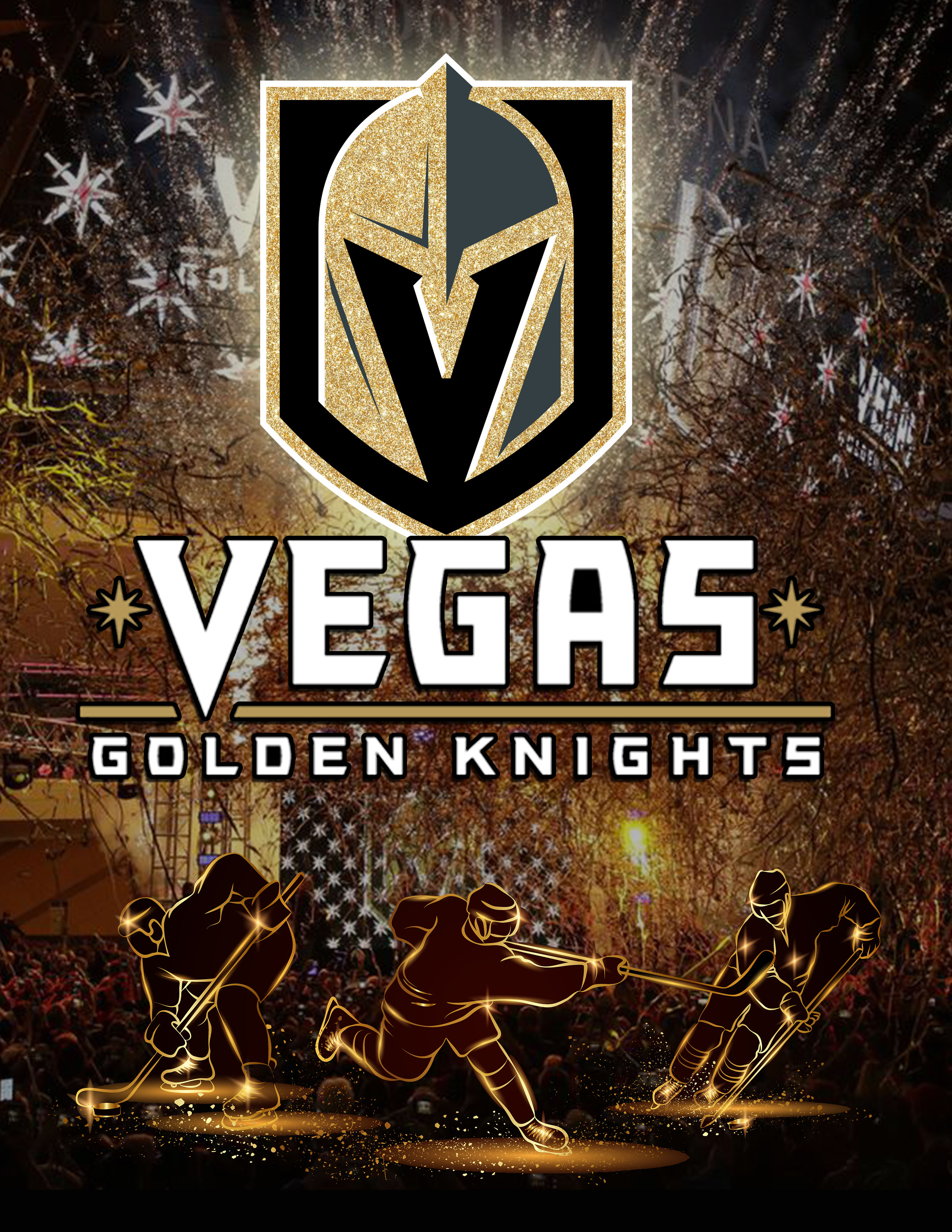 Screaming chants of “Fleury! Fleury!” for Vegas Golden Knights goalie Marc-André Fleury, echo throughout the T-Mobile Area during a recent Golden Knights hockey game. A man in a full-armor knight outfit visits the capacity crowd, looking like a knight who just escaped a dinner show at the nearby Excalibur hotel-casino. Fans, dressed up for different eras of music, compete for prizes during timeouts. The crowd then goes crazy when the Golden Knights score during a faceoff with the National Hockey League’s Calgary Flames.

Yes, big-time hockey has come to Las Vegas, and it has found success in spades. The Vegas Golden Knights, a dream of owner Bill Foley, have the best record of any expansion team in the history of major league sports (not just hockey). At one point in February, Las Vegas odds makers even put the Golden Knights as a favorite to win the NHL Stanley Cup championship.

The success is more than most Las Vegans hoped for. Heck, local sports fans were just thrilled to have any big league team to call their own. Most expansion teams downright stink in their first few seasons, and fans accept their teams’ woes as growing pains. But the Golden Knights were born ready to win, including an emotional home opener on Oct. 10, after the 1 October mass shooting on the Strip.

Few fans – or those in the sports world – predicted the unheralded success on the ice of the Golden Knights. A mix of tourists and locals fill up the 17,500 -seat T-Mobile Area, even on most weeknights. (The venue has different seating capacities for various events but can hold 17,500 for hockey games).

The Making of a Hockey Dream Team in the Desert

Steve Sisolak, chairman of the Clark County Commission and now a candidate for Nevada governor, was instrumental in bringing both an NHL team to Las Vegas (in the Golden Knights) and an NFL franchise (with the Oakland Raiders’ planned 2020 motive to the valley).

“I got involved with the ticket drive (for a proposed NHL team in Las Vegas),” Sisolak recalls. “The NHL commissioner, Gary Bettman, didn’t believe we could sell all those tickets.

That ticket drive resulted in the sale of 16,000 season tickets before a Las Vegas team ever took the ice. That helped persuade the NHL that Vegas would support a professional hockey team.

“This is a truly historic event for the Las Vegas community, the NHL and all of our fans,” Golden Knights Owner Bill Foley was quoted by NBCSports.com as saying in the fall of 2016, after Las Vegas was awarded an NHL franchise.

The national sports world raised a few eyebrows at the reality of the NHL team in Sin City: “Jackpot: Vegas expansion team sells out season tickets,” was the headline run by NBCSports.com on Sept. 19, 2016.

In the same article, James O’Brien wrote: “It still feels a little surreal that there’s really going to be an NHL team in Las Vegas, but Bill Foley & Co. continue to hit some significant milestones.”
Sisolak recalls the grassroots effort by hockey backers to get the tickets sold, even before an NHL franchise was awarded to Foley – and Las Vegas.

“They went to bars, and everyplace people gathered, to explain what hockey was and sell tickets,” he says. “They were all over the place, at all the events.”

Despite his enthusiasm and support for bringing an NHL team to Las Vegas, the county commission chairman didn’t anticipate the huge fan support the Golden Knights have since received in Southern Nevada.
“It’s filled to capacity. It is standing-room only,” Sisolak says. “I try to go to as many games as possible.”

Vegas has tried its Luck with the Puck Before

Longtime local sports reporter Steve Carp, who covers the Golden Knights for the Las Vegas Review-Journal newspaper, is impressed with the new hockey team, and not surprised by its popularity.

Later, the Las Vegas Wranglers filled the hockey void left by the Thunder’s demise. The Wranglers were part of what was formerly the East Coast Hockey League (ECHL) and, like the Golden Knights, were a Vegas expansion franchise.

The popularity of hockey in Las Vegas was also evident in the demand for Los Angeles Kings tickets, whenever the Kings played NHL games in Vegas, Carp adds

Of course, there’s that one important ingredient to any sports’ team’s success:

“The winning has a lot to do with it,” Carp says. “Let’s not kid ourselves.”

Las Vegas’ NHL franchise’s October 10th home debut should have been full of all the glitz and spectacle fitting the Entertainment Capital of the World. Those plans changed, however, when the unthinkable happened on Oct. 1, 2017. Stephen Paddock, a Mandalay Bay Resort and Casino guest, opened fire on more than 20,000 concert goers on the Las Vegas Strip, killing 58 and injuring more than 500.

Bill Foley, and the Vegas Golden Knights, stepped up to show the mourning community how much they cared. A moving tribute to first responders, and victims, replaced a spectacular opening night celebration.

“The community fell in love with the tribute to the first responders,” Sisolak says. “They had the names of all the victims on the ice.”

The Golden Knights’ home opener tribute to the first responders, and shooting victims, moved the city. The gesture transcended hockey fandom, and wins or losses.

Fields – and Stadiums – of Dreams

Big league sports, and the venues that are built around them, can re-invent a city, as the Brooklyn Dodgers did when they moved to Los Angeles in 1958. The team first played in the Los Angeles Coliseum. Later, the construction of Dodger Stadium at Chavez Ravine is credited for transforming modern Los Angeles into what it is today.

KXNT Las Vegas radio show host Alan Stock grew up in Southern California and remembers the changes brought about by the Dodgers’ move to the City of Angels.

But when looking at the Raiders’ planned 65,000-seat domed stadium, with construction costs estimated at $1.9 billion, he is not so thrilled. Lack of adequate stadium parking — along with the hefty public tab of $750 million from the hotel and motel room tax — are Stock’s main concerns.

“I don’t think the Raiders are paying enough,” the talk show host says.

“They have excited the whole valley, and become part of the community,” Stock praises.
Likewise, as the Golden Knights’ beat reporter, Carp has seen firsthand how important the hockey team has become both on — and off – the ice.

“The guys were giving blood after the (1 October) shooting,” Carp remembers. “They let the community know, ‘Hey, we won’t just forget about this in a week. We are with you.’”

Team owner Bill Foley, a West Point military academy graduate and longtime local, “gave $1 million to the (Las Vegas Metropolitan Police Department’s) foundation,” Carp points out. “The Golden Knights have not taken anything from the community. They have only given to the community. That is going to be a tough act for the Raiders to follow.”

Professional baseball, in the form of the Triple A Las Vegas 51s, was among the first professional sports franchises to take a gamble on the city. Debuting as the Las Vegas Stars in 1983, the now-51s will get a massive upgrade in 2019.

The baseball club has always played at the now-aging Cashman Field, in downtown Las Vegas. Now, finally, the team will get new digs. The 51s will be moving to a new, $150 million open-air stadium in Summerlin. The club will play there, beginning in the 2019 season.

Alan Snel, the founder of the sports business news site, LVSportsBiz.com, points to the economic impact of the new 51s’ stadium.

“They are going from an old, decrepit ballpark to what will be one of the most beautiful ballparks in the county,” he says.

Cashman has also become the home to the professional soccer team, the Las Vegas Lights. Soon, the WNBA Aces will make Mandalay Bay their home and begin play in Las Vegas.

As the teams serve diverse market segments, Snel predicts enough room for all the sports franchises to succeed, for now.
“They all have carved out their own niches. We have moved from a one-off sports-event town to a sports-team town,” he said.

As a reporter who covered the University of Nevada, Las Vegas Runnin’ Rebels basketball team in their heyday, when the team won an NCAA championship in 1990, Carp also sees a transformation.

“We went from a college-sports town to a professional-sports town,” Carp sums up.

Sisolak views the growth of professional sports in the city as a step forward, with every addition of a team, event, or venue, being progress. The Golden Knights debut, along with the Raiders’ planned move to Las Vegas, are among the biggest building blocks in transforming the city.
“We have NASCAR, we have the Aces, the Lights, a new 51s stadium in Summerlin, along with the T-Mobile Arena and the Golden Knights,” the county commission chairman lists. “The Raiders’ stadium will reinforce that Las Vegas is the entertainment – and sports – capital of the world.”
Economically, Sisolak says the city will also benefit from increased tourism dollars.

“People might come for one or two nights, but stay that extra third or fourth night, he predicts. “They will fill those hotel beds, and keep people coming to the casinos.”

But for the close to 17,000 (mostly-screaming) fans at each Golden Knights game at the T-Mobile Arena, economic data is the last thing on their minds.

A high-scoring game, the excitement of “a fight!” and plenty of jersey-buying afterward, were all part of the recent Vegas Golden Knights’ experience.

When learning that a local fan was attending their first game, a visiting tourist from Calgary was quick to praise the home-town Knights.

“You picked a great game,” she said, “and you have quite a team!”