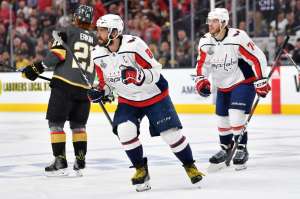 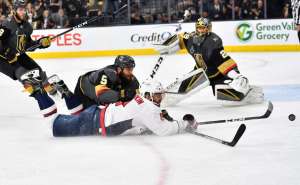 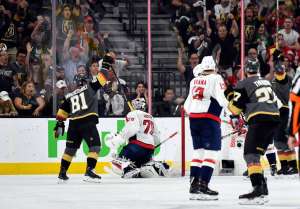 The Washington Capitals, who began play in the NHL in 1974, reached the Stanley Cup Finals for just the second time in their history. The first time was 20 years ago in 1998 when they were swept by the Detroit Red Wings. On Thursday in Las Vegas, the Capitals made good on their second chance, defeating the Vegas Golden Knights 4-3 in Game 5 of the Stanley Cup Finals, winning the series four games to one.

Washington’s Lars Eller scored the Cup-winning goal at 12:23 of the third period after Devante Smith-Pelly tied it 3-3 at 9:52.

Alexander Ovechkin, who is the first Russia-born captain to win the Stanley Cup, and Jakub Vrana also scored, and Braden Holtby made 28 saves for the Capitals.

This was their 43rd season. It was Ovechkin’s 13th season and Washington’s 10th appearance in the Stanley Cup Playoffs since 2008.

Ovechkin won the Conn Smythe Trophy as MVP of the playoffs. He led the League with 15 goals, setting a Capitals record for a single postseason.

The Capitals tied an NHL record for most road wins in a postseason (10). They ended each series on the road, all on their first try, after trailing in each series.

The Capitals lost Game 1 of three of their four series and trailed 3-2 in the Eastern Conference Final against the Tampa Bay Lightning before winning Games 6 and 7 by a combined 7-0.

Prior to Thursday, the Golden Knights had never lost more than three consecutive games throughout their historic inaugural season. They ended the season losing their final four games.

Eller scored the winner from the slot, shoveling the puck into the net after it got behind Fleury, who made the initial save on Brett Connolly’s shot.

Vegas rallied to score twice in the final seven minutes of the second period to take a 3-2 lead.

Perron tied the game at 2-2 at 12:56 after he was pushed into the net by Washington defenseman Christian Djoos. The Capitals challenged the goal, claiming goalie interference. Video review showed that when it was Djoos who caused Perron to contact Holtby before the puck went into the net. Colin Miller took the initial shot and Tomas Tatar deflected it toward the net where it hit Perron as he fell into the net.

Reilly Smith put Vegas ahead with a power-play goal at 19:31. Shea Thedore took a shot from the blueline that Alex Tuch deflected into Holtby. Tuch gathered the rebound to the left of Holtby and found Smith crashing the net on the opposite side who put it in virtually uncontested.

After a scoreless first period, Washington took a 1-0 lead on Vrana’s breakaway goal at 6:24 of the second. The Golden Knights tied it 1-1 at 9:40 when Nate Schmidt’s shot deflected in off Matt Niskanen’s right skate.

After the game, Vegas forward Jonathan Marchessault said, “You don’t want to finish on a note like that, necessarily. But one thing I know: We’ll be back.”