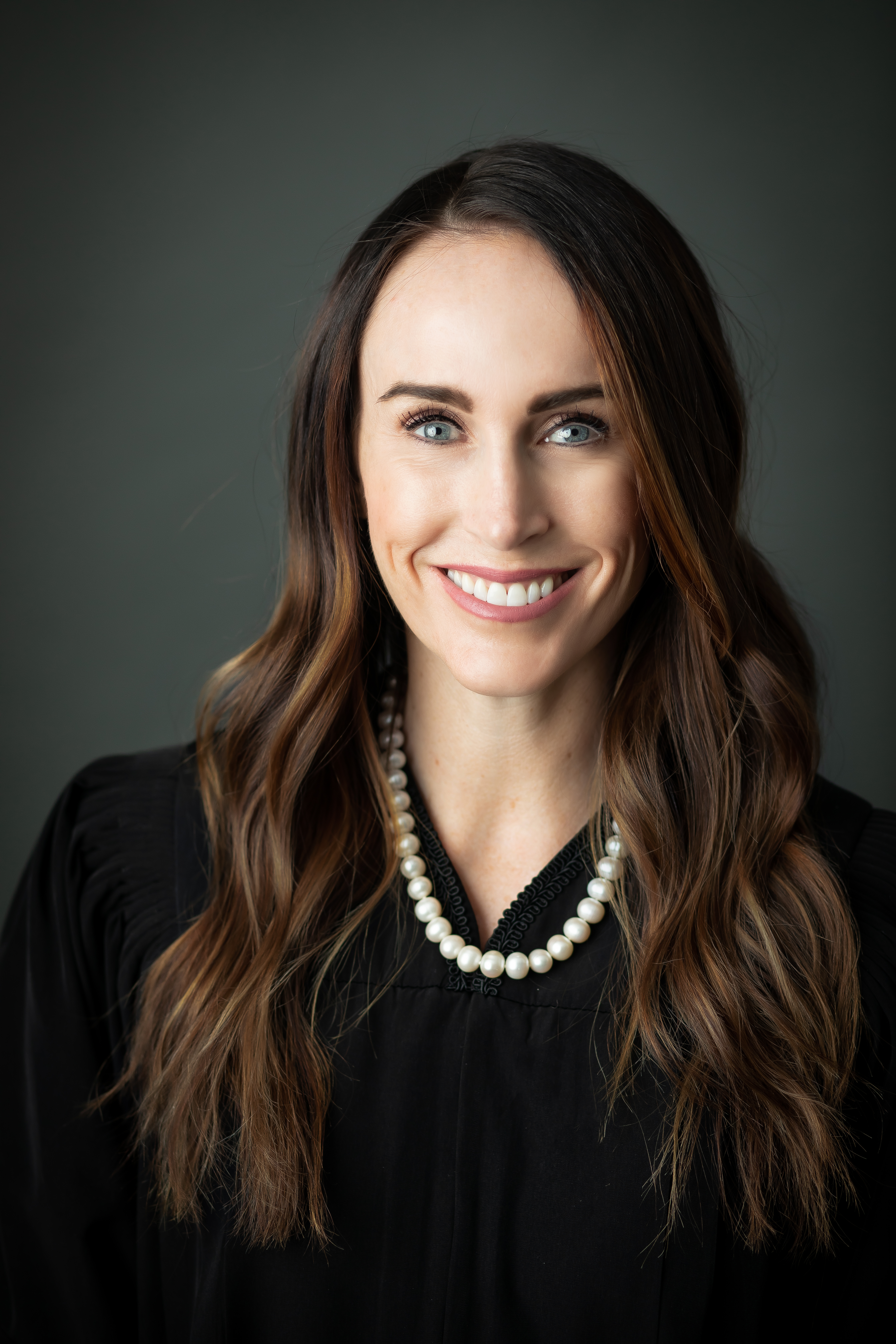 Judge Jacqueline M. Bluth was born and raised in Reno, Nevada. She received her undergraduate degree from the University of Nevada, Reno. After graduating from UNR, Judge Bluth moved to Las Vegas to attend the William S. Boyd School of Law where, in her third year, she would become President of the Law School’s Student Bar Association.

After law school, Judge Bluth was hired as a District Attorney at the Clark County District Attorney’s Office. Judge Bluth fought for the most vulnerable individuals in our society, children. Judge Bluth was the second youngest female to ever be promoted to Special Victims Unit where her caseload focused primarily on the prosecution of cases involving physical and sexual abuse of children, 10 and under. In 2015, Judge Bluth was the youngest female to ever be promoted to the Homicide Division. While there, Judge Bluth prosecuted all types of homicides, but specialized in the homicides of children, 4 and under. In her career as a district attorney, Judge Bluth tried over fifty-five jury trials, almost all of which were for crimes of homicide and/or sexual assault.

Also during her tenure as Chief Deputy District Attorney, Judge Bluth worked very closely with doctors, social workers, and law enforcement personnel as a member of the Clark County Child Death Review (CDR) team.   The purpose of this review board is prevention, education, and case analysis to determine needed policy protocol and statute changes in our community. CDR findings have influenced both policy changes and the direction for public awareness campaigns. Judge Bluth also served on a committee with local county commissioners that wrote policy to protect children involved in foster care.

As a prosecutor, Judge Bluth helped author several pieces of legislation, many of which were passed by the Nevada State Legislature.   Judge Bluth testified in front of the Nevada Legislature on two different occasions in Carson City. Ultimately, this legislation allowed changes in the law in the fields of sexual abuse of men, women and children, as well as sex trafficking. Additionally, Judge Bluth provided training to officers throughout Las Vegas in identifying and combatting child abuse with the goal of lowering the rate of child homicide in our community. Judge Bluth also provided educational courses to members of the Department of Family Services, Child Protective Services.

Giving back to her community is something that Judge Bluth takes seriously, both in her professional and personal life.  As a career prosecutor she fought hard to help victims of violent crimes find justice.  In her personal life, Judge Bluth works with different members in our community to make sure all community members’ needs are met.

Judge Bluth was previously the gospel doctrine teacher at her church.  She is currently the president of the primary where she helps teach and mentor children from 18 months to age 10.  She also works within a group at her church in providing various services to those in our community.  The group regularly volunteers in community cleanup projects, provides clothing and necessities to several shelters, including but not limited to women and children shelters.  They also regularly provide school supplies, coats, and backpacks to children in need.  In August of 2018, they held a “Humanitarian Day.”  For this project, they picked eight (8) different charities in our community to focus on and help.  The charities they worked with that specific year and donated to were Lullaby Connection, Project Linus, Ryan’s Case for Smiles, Womens Cancer Center, Lighthouse Charities, Spread the Word Nevada, Nevada Childhood Cancer Foundation, and Sole Hope.

Recently, Judge Bluth was appointed to the Advisory Commission on the Administration of Justice where individuals from different backgrounds and professions work together to improve the criminal justice system.