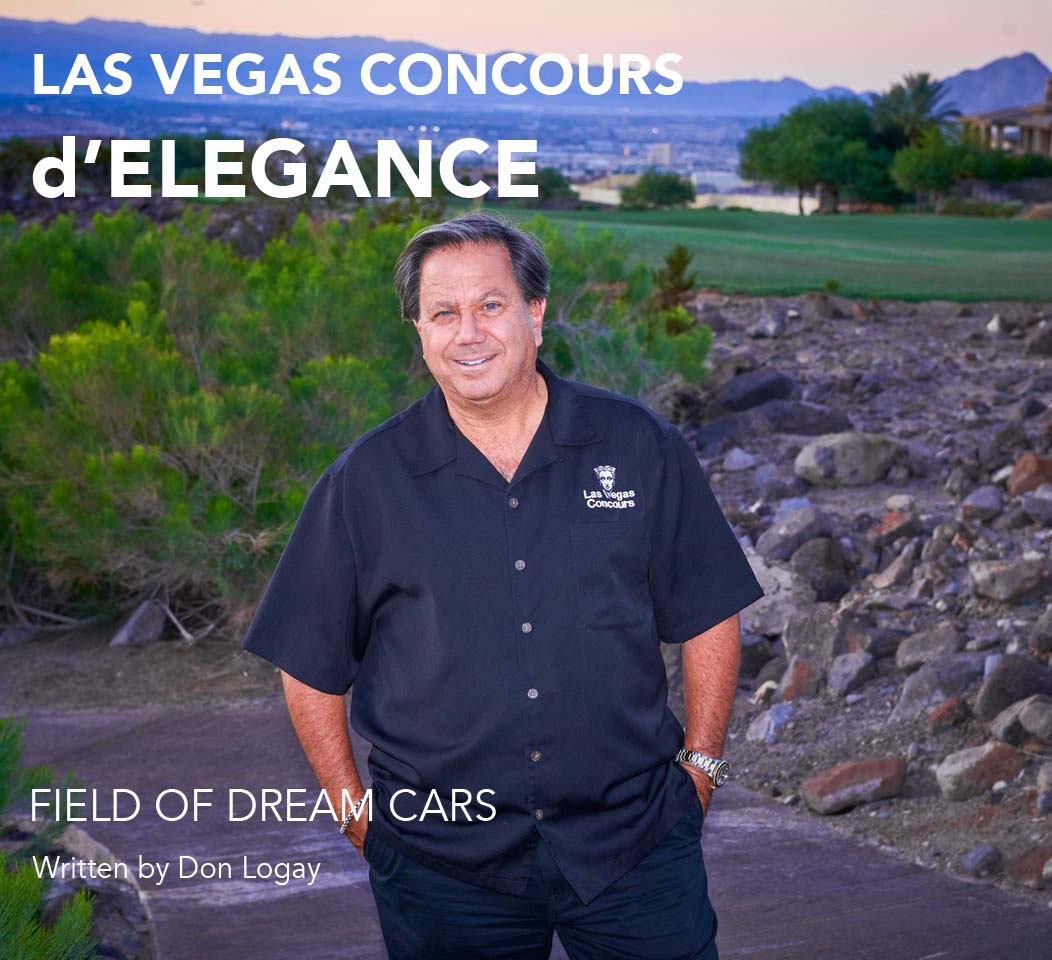 The prestigious Las Vegas Concours d’Elegance will again bring more than 100 of the most magnificent collector cars to the entertainment capital of the world.

Now in its second year, the 2021 Las Vegas Concours d’Elegance, scheduled for October 21-23, will also feature an exciting new venue and two days of pre-show

Concours d’Avant celebrations and special events to get things underway.

For an insider’s advance peek at this “show-of-shows” for the automotive world, we met with Stuart Sobek – Founder, Chairman and Innovator-in-Chief of this famous showcase of automotive excellence that is soon coming to our town.

At first, Sobek’s friendly smile and appearance seems somewhat familiar. A bit like Tom Bosley – the actor who played Howard Cunningham on TV’s Happy Days. But, at the first mention of Concours and vintage automobiles… within moments, and still with an engaging smile… he puts forth a steely-eyed knowledge of classic collector cars and details the showmanship involved in putting together a one-of-a-kind show such as this.

Today are 40 Annual Concours d’Elegance events in luxurious locations worldwide and we wanted to know how and why he set out to bring one here.

“In the automotive world, Concours d’Elegance events are simply the crème de la crème of automobile shows,” Sobek states. “They transcend basic motoring history and instead, elevate truly outstanding and amazing vehicles to a captivating art form.” “I’ve been attending famous concours events around the world for over three decades,” he notes, “and a few years ago, while at a show, I thought ‘Why don’t we have this in Vegas? Today we’ve got ice hockey and pro football… why not Vegas?’…  and it began a four-year labor of love that I am proud to say is today’s reality.” 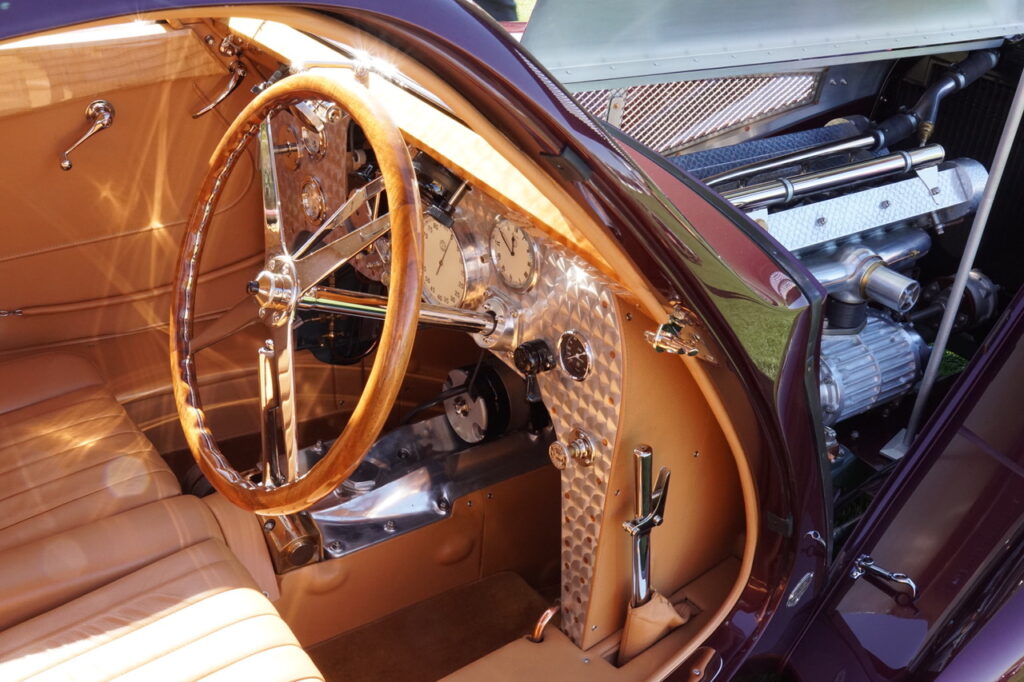 With that, Sobek put a number of things into motion and, in turn, created a legacy of innovative ‘signature” touches that are the hallmark of today’s Las Vegas Concours d’Elegance.

“I wanted to make ours equally good,” Sobek adds, “maybe even better.”

One of Sobek’s innovations for the Las Vegas Concours was found in researching the history of automotive design. In doing so, he came across a unique woman named Helene Rother.

“In 1943, she became the first female designer at General Motors,” states Sobek. “Talented and ahead of her time, she designed upscale interiors for everyday cars that rivaled the best luxury cars of the day.”

While she was generally unknown today, Sobek’s team settled on Rother as their figurehead… first creating her likeness in a distinctive Art Deco logo and then extending her image to a beautiful gleaming “Helene Awards” statuette presented to winners of the Best-in-Show judging competitions.

“An interesting result is that it also brought Helene Rother into the spotlight within the automotive world,” he adds. “So much so, that in July she was among a small group of industry luminaries inducted into the Automotive Hall of Fame in Dearborn, Michigan.” Thanks to Sobek and the Las Vegas Concours Helene Awards.

Another Sobek talent, is the ability to envision and masterfully bring together the very best of automotive history and elegance… and to seamlessly blend the golden age of automotive design with star cars of today and showcase them all with style and innovation… from opening ceremony to being seen an exciting new venue.

It begins October 21st with the kick-off Concours d’Avant (French for “Before) media event at the Shelby Heritage Center, home of the famous Carroll Shelby Museum (featuring over 30 of his most famous Cobra and Ford Mustang cars) and the Shelby American Facility where today’s latest and hottest Cobras are being built… all just off the South end of the Las Vegas Strip.

Of note, Carroll Shelby’s impact and influence on the world of auto racing in the 1960s, was recently featured in the 2019 “Ford vs Ferrari” movie… and in the “tying-it-all-together” department, Peter Brock – one of Carroll Shelby’s first employees who later designed the famous Corvette Sting Ray – will also receive a Helene Award for lifetime “Achievement in Automotive Design” at this year’s show.

By coincidence, October 21st (the day of the Concours d’Avant kick-off at the Shelby Museum) is also widely known as “Back to the Future Day” – as that date was punched in by Marty and Doc in “Back to the Future II” – and it is rumored they now just may be setting October 23rd for their famed DeLorean DMC-12 Time Machine to appear at Sobek’s next ground-breaking innovation.

Historically, Concours events are held on the lush fairways of famous golf courses around the world. However, Sobek thinks there is a better way to view and experience the very best of the automotive world’s classics.

As such, this year’s show blends 70-years of famed concours elegance with one of today’s most up-to-the-minute sports facilities – the Las Vegas Ballpark in Summerlin. 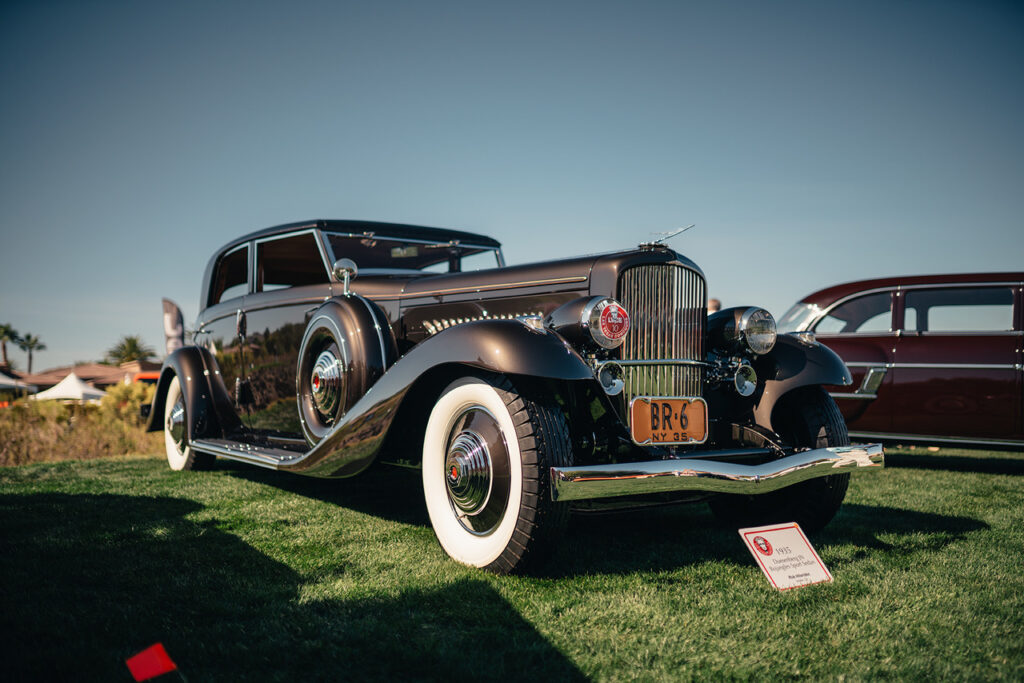 “In addition to close-up viewing down on the field, spectators will also experience an overall panorama from the grandstand,” he adds, “and an exciting Concours ‘first’ with after dark viewing under the lights.”

This is just some of what has earned Sobek and the Las Vegas Concours d’Elegance the title of “The Future of Looking Back.”

“In the mid-1950s and 60s, Southern California emerged as the car capital of the world. It was an unprecedented time for the automotive industry,” observes Sobek.

“While this era produced some of the all-time best-looking cars in the 100-year history of the automobile industry, Southern California not only took notice – it took charge – and so did a number of significant individuals.”

“Thanks to these visionaries, and many other such collectors around the world, they are graciously providing some of their very best and most famous cars… selected from an amazing array of pristine vintage automobiles, sole surviving models and one-of-a-kind creations… for the Las Vegas Concours d’Elegance of 2021.”

With this in mind, we asked Stuart Sobek what superstars we might expect to see at this year’s show… and again, we encountered that steely-eyed response of an avid fan of vintage automotive excellence.

“We are extremely proud to have the 1936 Horch 853A Special Roadster as a focal point at our show. Built in Germany and intended to be the world’s finest automobile, only seven were built,” states Sobek, “and this beautifully restored survivor is being seen for one of the first times here in the United States.”

“Another first is that we will actually have two Horch cars at our show,” he adds, “with a 1937 Horch 853 Cabriolet, from another private collection, that Robb Report honored as their ‘Best of the Best’ winner for 2021.” 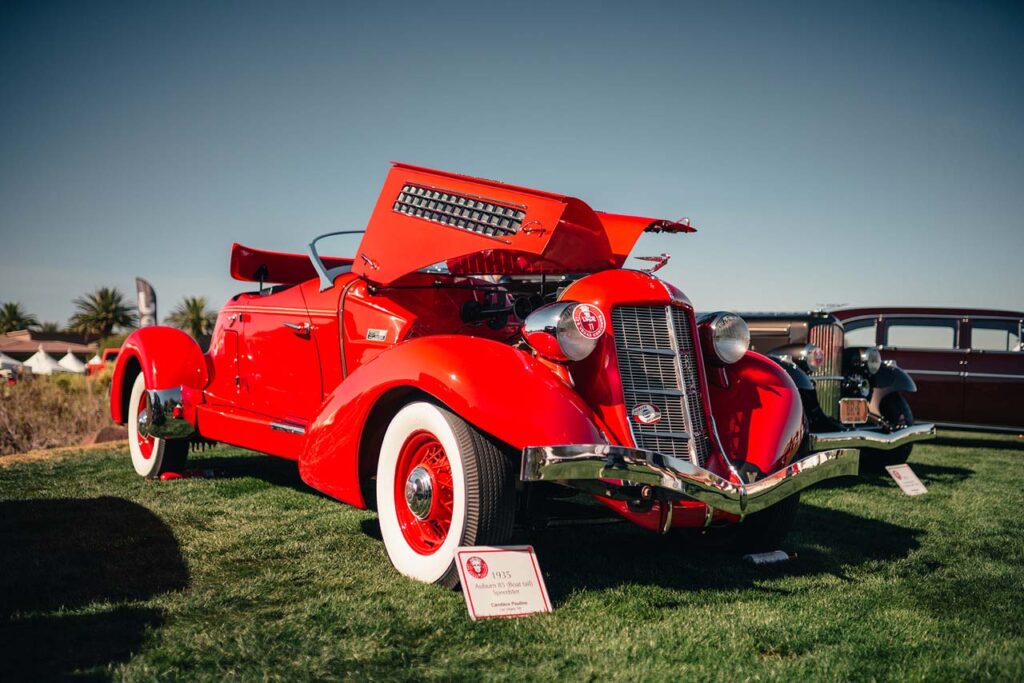 We sat in awe as Sobek ticked off a long list of incredible cars. “Well known and respected collectors, Helen and Jack Nethercutt… who won our Best-of-Show in 2019… are bringing two magnificent cars. A 1938 Mercedes-Benz 540K (Type W-129) – estimated at around $15 million – and their priceless 1913 Mercedes Model 37/95 Double Phaeton Torpedo.”

Continuing, he notes there will be five amazing “Stars Cars” coming from the Petersen Automotive Museum in Los Angeles. “One is Rita’s Hayworth’s stunning 1953 Cadillac Ghia Coupe (one of only two ever made) and four from Metallica front-man James Hetfield’s jaw-dropping collection.”

Another ”Star Car” – coming from the National Automobile Museum in Reno, the Harrah Collection – is the 1933 Cadillac Phaeton owned by famous singer, Al Jolson of the 1920’s and 30s, that appeared in the first talking motion picture… as well as a 1906 “Rotary Engine” Adams Farwell – innovative and the only one known to exist.

Other notables include a 1963 Rolls-Royce Silver Cloud III Mulliner Drophead Coupe, a 1934 Auburn V-12 Model 1250 Phaeton Salon Convertible, two Carroll Shelby cars and the 1989 Lamborghini Countach, from the movie “Wolf of Wall Street,” along with a long list of amazing cars you never heard of, like the 1939 Delahaye 135M Figoni & Falaschi Kazamek and a 1935 SS-1 Airline… to name but a few.

“One could travel the world to experience these amazing vintage classics in their respective automotive museums and private collections… or… (dramatic pause)… you can see them all… in one place… and at one time,” he beams.

“While Las Vegas is known as the entertainment capital of the world,” Sobek concludes, “for three exciting days in October, the Las Vegas Concours d’Elegance is making our town the epicenter of the automotive world… don’t miss it.”