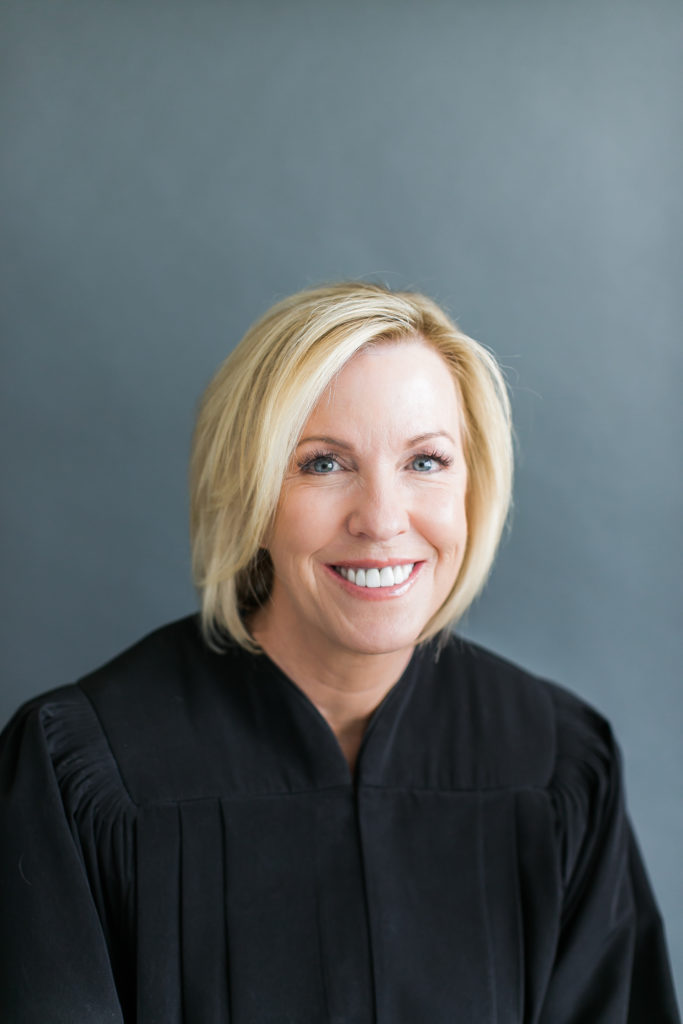 In April 2019, Rhonda was honored to be selected by the Governor of Nevada to serve as Judge of Family Court Department G. Judge Forsberg loves serving the residents of Clark County to assist them through some of the most difficult times in their lives. Since taking the bench she has worked hard to ensure that all litigants are respected and have the opportunity to have their positions heard. She understands that people need their cases resolved so they can begin to heal and move on with their lives.

She is the youngest of five children, and the first of her family to attend college. Rhonda was a non-traditional student. Rhonda obtained a Bachelor’s Degree in Psychology from the University of Utah in 1995, while working fulltime and raising a family. Rhonda was grateful that UNLV’s law school offered a night program that allowed her to complete her law degree while working full time. She completed her law degree from UNLV’s William S. Boyd School of Law in 2005.

Rhonda believes in helping the community. During college she found time to volunteer with Salt Lake Rape Recovery Center. Rhonda assisted victims of sexual assault. In addition, Rhonda has served on the Board of Nevada Partnership for Homeless Youth, has devoted many hours of pro bono work assisting children in abuse and neglect cases, and the Ask A Lawyer program as well as other cases assigned by Legal Aid.

The majority of family cases in Nevada are filed in proper person by parties who cannot afford counsel. Understanding that the majority of cases that would appear before her would be parties in proper person, Rhonda accepted an appointment as court appointed counsel in juvenile dependency court, representing low income parents. Serving low income parties has broadened her knowledge which has been an asset as a judicial official.

Prior to being appointed as Judge of Department G, Judge Forsberg served as a pro tem hearing master for domestic violence/TPO and family discovery court. She has also served on several committees to improve the family court system; the Bench/Bar Committee, the Court Technology Committee, the Settlement Master’s Program, a judge for the Truancy Diversion Program, and was appointed as the chairperson for the Outsource Provider List Committee.

Though Judge Forsberg loves her legal career, her greatest achievement is raising two daughters that are successful, productive members of society.

Though we have made great strides in access to justice, there is still more to be done. As approximately 70% of the cases before me are pro se litigants, increasing alternative dispute resolutions would greatly improve the current system. Currently the Family Court utilizes the Senior Settlement program and the Judicial Settlement Program. Where Senior Judges and sitting judges conduct judicial settlements for cases from other departments. These programs are extremely successful. When you consider that a majority of the litigants in Family Court are still going to be in each other’s lives, having alternative resolution can minimize the adversarial process and assist families to heal to be able to co-parent more efficiently.

The power to initiate policy remains with the legislative or the executive branches. The judiciary should be careful to not usurp the policymaking role of the democratically elected bodies and officials.

Obviously, there always will be some ambiguity, hard cases, and challenges in applying the law to new, unforeseen circumstances. In those instances, a judge’s responsibility to differentiate the specific facts is necessary, when interpreting laws. However, the Court must be cautious to not impute its own preferences over those of the duly elected legislature. The people must respect judicial decisions to obey them. That respect and legitimacy comes when decisions are grounded in legitimately established constitutional laws.

I have always done volunteer work. Prior to taking the bench I served on the Board of Nevada Partnership for Homeless Youth to uplift homeless youth in our community ,volunteered for the “Big Search” to locate missing children, devoted many hours of pro bono work assisting children in abuse and neglect cases, served as a truancy diversion Judge and volunteered for the Ask A Lawyer program as well as other cases assigned by Legal Aid.

You can learn more about Judge Forsberg by visiting her website: httpshttps://www.forsberg4judge.com