It was a typical afternoon in Washington D.C. The phone rang with a message that will get anyone to sit up and snap to attention: “This is the White House calling.”

President Ronald Reagan: Can I call you Jim?

Yes, Mr. President, you can certainly call me Jim.

Well, you can call me Ron.

I think I’ll call you “Mr. President” because I have such respect for the office. But you are welcome to call me Jim.

Following an accomplished tenure as a business attorney and a University of Nevada system Regent, Bilbray went on to serve with distinction in the Nevada State Legislature, becoming chairman of Senate Taxation Committee and serving on the Judiciary Committee.

His time in Congress represented a period of tremendous personal and professional growth for Bilbray, whose father served as a county assessor and owned a shoe store in Las Vegas, which had a population of fewer than 8,400 souls when Jim Bilbray entered the world.

It turned out that Jim’s friends who also had political aspirations were also finding themselves — people like Manny Cortez, for instance, the longtime Clark County Commissioner who helped grow the Las Vegas Convention and Visitors Authority into the marketing behemoth that we know so well. Then, of course, there was that other small-town Southern Nevada guy who Jim hung out with: Harry Reid.

When Reid, Nevada’s big rising star, decided to move on from his U.S. House of Representatives seat and take aim at the U.S. Senate, Bilbray stepped up to the plate and became Nevada’s U.S. Representative for the state’s 1st Congressional District, serving in that post from 1987 to 1995.

It was a time of pivotal change for the U.S. and for global politics as a whole.

Bilbray recalled when President Ronald Reagan called him personally during Reagan’s effort to drum up support for an aid package to the Contras, the right-wing rebel operation in Nicaragua — which Bilbray ultimately voted against.

VLM: Another memorable day during your eventful tenure on Capitol Hill came on November 9, 1989, with the fall of the Berlin Wall, marking the tumbling of the Iron Curtain and the beginning of the fall of communism in Central Europe and Eastern Europe. What was it like being in the House at that point, and what are your recollections of that remarkable milestone? 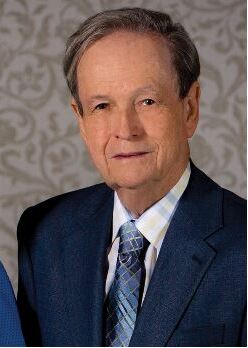 JB: Incredibly, we got zero advance notice. Nothing. First of all, my wife was the one who first told me the wall was coming down. She called me to alert me. We had the television running in the background in my office in Washington, and suddenly they’re showing people climbing all over this wall with sledgehammers. So we basically found out that the Soviet Union was falling apart from live TV — CNN and the rest of the news channels. [Text Wrapping Break]

Later, we learned that the command given to the East German guards there was not to open the gate, it was just something like don’t shoot anybody. But the guards there were simply getting sick and tired of it, and they finally just decided to throw open the gate. We had known already that the Czechs had already opened their gates into Austria and those places. They were driving those little cars, Tatras or whatever they were, and just leaving them at the Czech border and walking into Austria. So the horse was out of the barn already. It was collapsing fast.

VLM: The very next morning, CIA briefers made an ominous prediction: The “good old days” of the Cold War were now over. It was now the new “bad old days” of splintering interests throughout the world, of radical, extremist religious groups of isolation and an ascending, feverish nationalism that had previously been collared under the old Soviet bear.

There was talk of a then all-new futuristic unmanned aircraft that could hover undetected over battlefields seemingly endlessly — the first stages of today’s modern drone warfare.

Then, a bit later, there was a drumbeat from the Bush administration — the threat of Saddam Hussein’s republican army threatening to strip or destroy Kuwaiti oil fields while committing atrocities against the Kurds.

JB: The administration claimed that Iraqis were taking away the baby incubators in the ICUs. They were going into the hospitals in Kuwait and taking out the incubators and the babies were dying. We had heard word of that, but it turned out not to be true. The Bush administration had sent false signals to the Iraqis, stating that we would not object to them going into Kuwait, that it was clear for them to go in. The secretary of state was even kept out of the loop as far as where the money was going and what it was going to be used for.

It was a sad time for our Intelligence community. And we were also very mad that so many of the young Kuwaitis had fled Kuwait on planes to head to Egypt and going to discotheques in Cairo — meanwhile our U.S. troops were flying in to save the country.

VLM: That also led to the famous humanitarian relief effort in which U.S. air and ground forces delivered relief supplies to the Kurds, who had been driven from their homes and into the rugged mountains along the Iraq-Turkey border by Saddam Hussein’s Iraqi army.

JB: I was very close to both major Kurdish leaders at the time. We were funding both of the two big factions of Kurds at that time.

I personally met with people who then took their cameras over there to that part of the world and film what was going on. They could come back and show their footage to the networks, and we could be sure the American people would not let them starve on a mountainside. It was about a week later that we were parachuting food, supplies and other aid right into the mountaintop region there.

In fact, they parachuted in at night. I vividly remember them dropping in there at night. You might have thought they’d be wearing night goggles, but they weren’t. The pictures I remember reminded me of Mogadishu when they landed at night.

It was so memorable because when they landed and looked around, the news media was already there. The troops weren’t met by enemy soldiers — they were met by cameramen from ABC, NBC, CNN and the others. It seemed like the press was there before we were there.

VLM: The political landscape has become so much more divided since you served in the House. While you tried to be nonpartisan when it was possible, striving for cooperation, today’s scene is dominated by partisan politics. What would you say to someone considering entering politics today and having to deal with that reality?

JB: I’m one who firmly believes that you should get into politics at a grassroots level. Unfortunately, that approach seems to be falling out of favor. So often these days, especially on the Republican side, if you have money or access to money, you just buy your way into a seat.

And of course there is a lot of dark money that pours into these campaigns. They’ve really created a monster, and now they have to live with it. Especially with Trump leading the party, you see them beating up on their fellow party member in the primary. It makes you wonder how far you can this type of partisanship. But they’re so scared of Trump right now, these candidates feel they have to support him or else get they’ll get primaried out.

The Democratic side isn’t immune to it either. On our side you’ve got the far left, and there are some serious problems there, like when they came up with that terrible slogan “Defund the Police.” That can do terrible harm. I think that was the stupidest thing they ever came up with.

All I can do is tell people to try to work together as much as possible. Remember, we did work together well prior to Newt Gingrich taking over in 1994. He promoted his “burning down the house” style of politics.

However, no one realized, even many in Gingrich’s own party, that they were going to go as radical as they did. But they did.