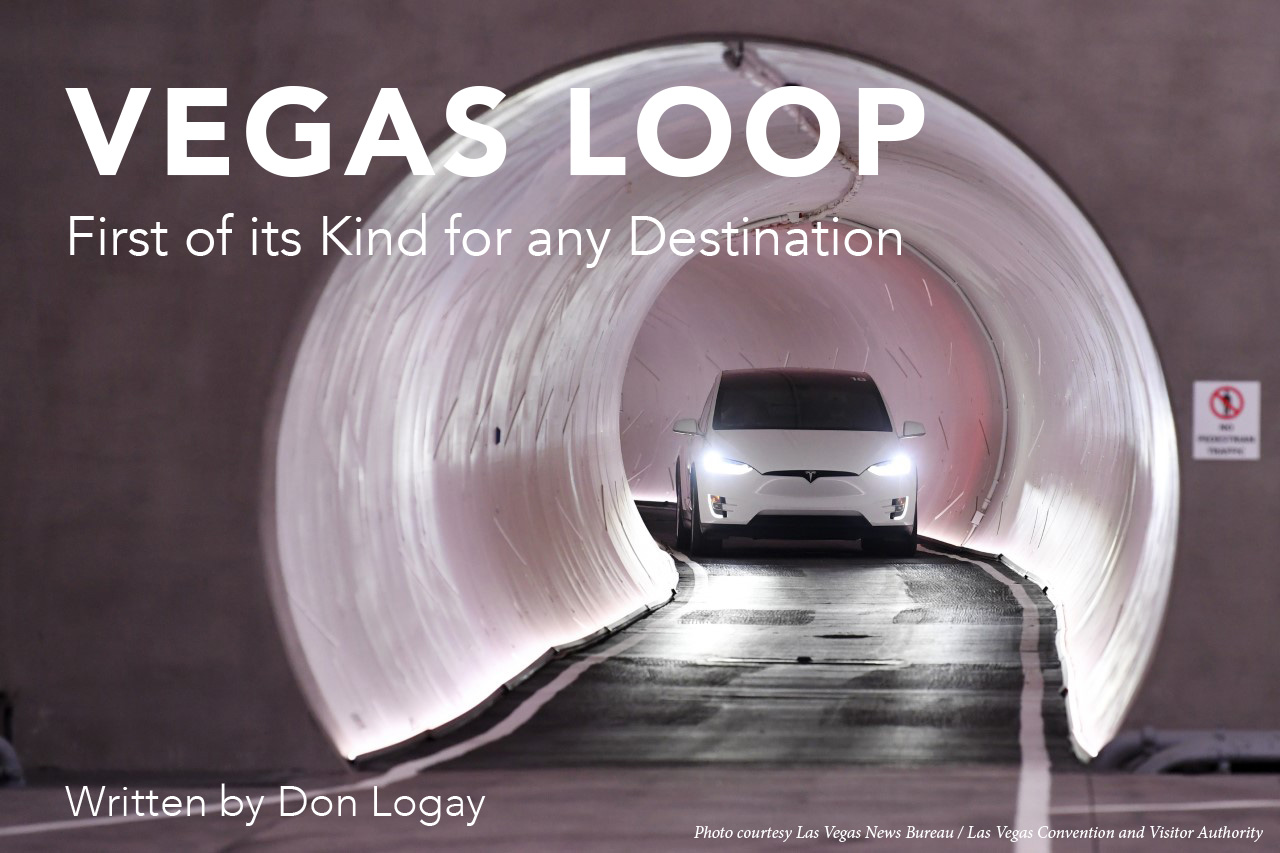 On November 15, 2019, a huge earth moving machine fired up in a parking lot just off the Las Vegas “Strip” and began digging a revolutionary concept that soon will serve all of Las Vegas, and quite possibly, extend far beyond.

It is the first step in a massive master plan envisioned by Elon Musk to complete and link a series of tunnels beneath cities to create a futuristic underground transportation system and network unlike anything ever seen before – and Las Vegas, the city of visionaries, gamblers and high-rollers, has placed a huge bet on it.

At the speed of one mile per hour and a rate of 100-feet per day, history was being made, slowly and methodically, 40-feet beneath the surface for the first segment of an expansive project that will soon be known as the “Vegas Loop.”

Haven’t heard of it? You will soon.

The first 4,500-foot tunnel took three months and was completed in February 2020. The second was finished in May 2020. Together they totaled 1.7 miles.

When all interior work was done, the highly-anticipated LVCC Loop officially opened with great fanfare in April 2021 – with two subterranean “highways” and a fleet of Musk’s all-electric Tesla automobiles whisking conventioneers through dramatically illuminated 12-foot round tunnels to three exhibit hall stations spread across the sprawling 200-acre site.

Currently, the LVCC Loop transports tens of thousands of passengers per day for all conventions (SEMA 2021 handled 24,000 to 26,000 riders per day, for example) and it reduces a previous 45-minute cross-campus walk (often in sweltering Las Vegas heat) to a cool free transit time of just two minutes.

“This milestone is an important step in the development of a game-changing transportation solution in Las Vegas,” states Steve Hill, President of the Las Vegas Convention and Visitors Authority.

On June 30, 2022, the second phase of Musk’s dynamic plan became a viable reality when the new “Resorts World Station” opened for business.

With the same design, a dual underground tunnel extension – owned and paid for by Resorts World – now also connects the new Casino/Hotel directly to the Las Vegas Convention Center and its recently completed LVCC Loop.

“Today marks a monumental moment not only for our resort, but for Las Vegas,” states Scott Sibella, President of Resorts World Las Vegas. “Our passenger station makes the transition between our resort and the Las Vegas Convention Center easier than ever.” 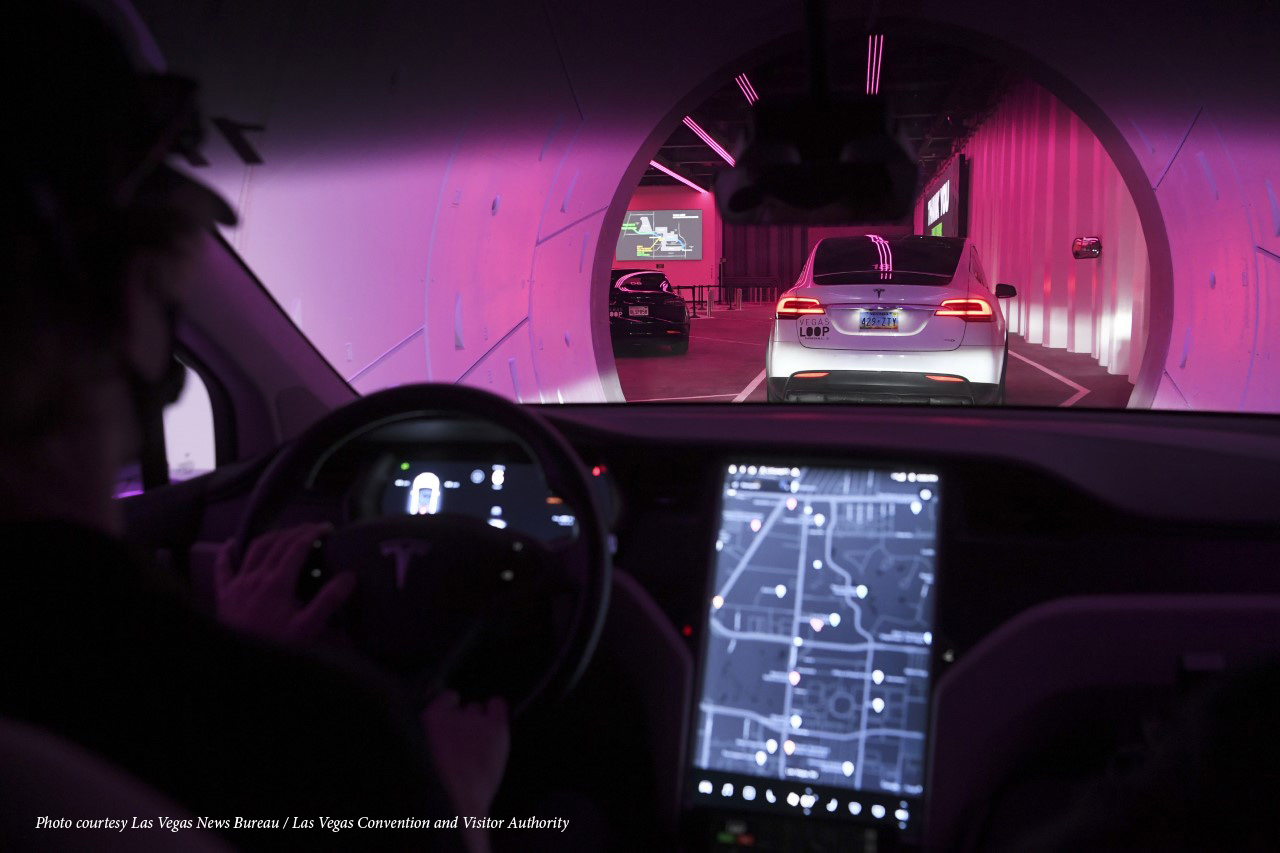 “Resorts World Las Vegas is now also poised to connect to the expanded ‘Vegas Loop’ system,” Sibella continued, “when development efforts move forward on this innovative transportation system… and it will eventually connect us to many key destinations throughout the city.”

The Resorts World Station is just the first of 55 proposed stops that will eventually line a “Vegas Loop” that soon will be transporting tens of thousands of passengers per hour throughout downtown Las Vegas and the Strip resort corridor.

The Vegas Loop underground highway system is slated to be constructed in two major phases that will ultimately extend the existing LVCC Loop and Resorts World Station segments to a city-wide loop of 29-miles with two parallel tunnels running 14.5 miles in each direction.

From Resorts World, it will circle Downtown, Fremont Street and the City of Las Vegas to the North and run South directly beneath the Las Vegas Boulevard Strip all the way to Allegiant Stadium and Harry Reid International airport.

An initial stage-one agreement made with the City of Las Vegas City Council will extend the Vegas Loop from Resorts World to five currently planned stations with stops at landmarks like the Stratosphere and Fremont Street Experience.

The Special Use Permit allows TBC to apply for, and receive, building permits to construct the proposed tunnels. The Franchise Agreement allows the company to operate the system, collect fares and oversee advertising and partnerships.

The mega-million development and construction cost of the overall Vegas Loop tunnel system will be fully paid for by The Boring Company, while individual stops and passenger stations – each costing up to $20 million – will be funded by participating Hotel/Casinos and ridership will be fare-based for passengers.

“We are very excited to take the next steps,” notes Steve Davis, President of The Boring Company. “and look forward to working with Clark County leaders and our partners throughout Las Vegas, to build a fast, safe transportation system for this incredible destination.” 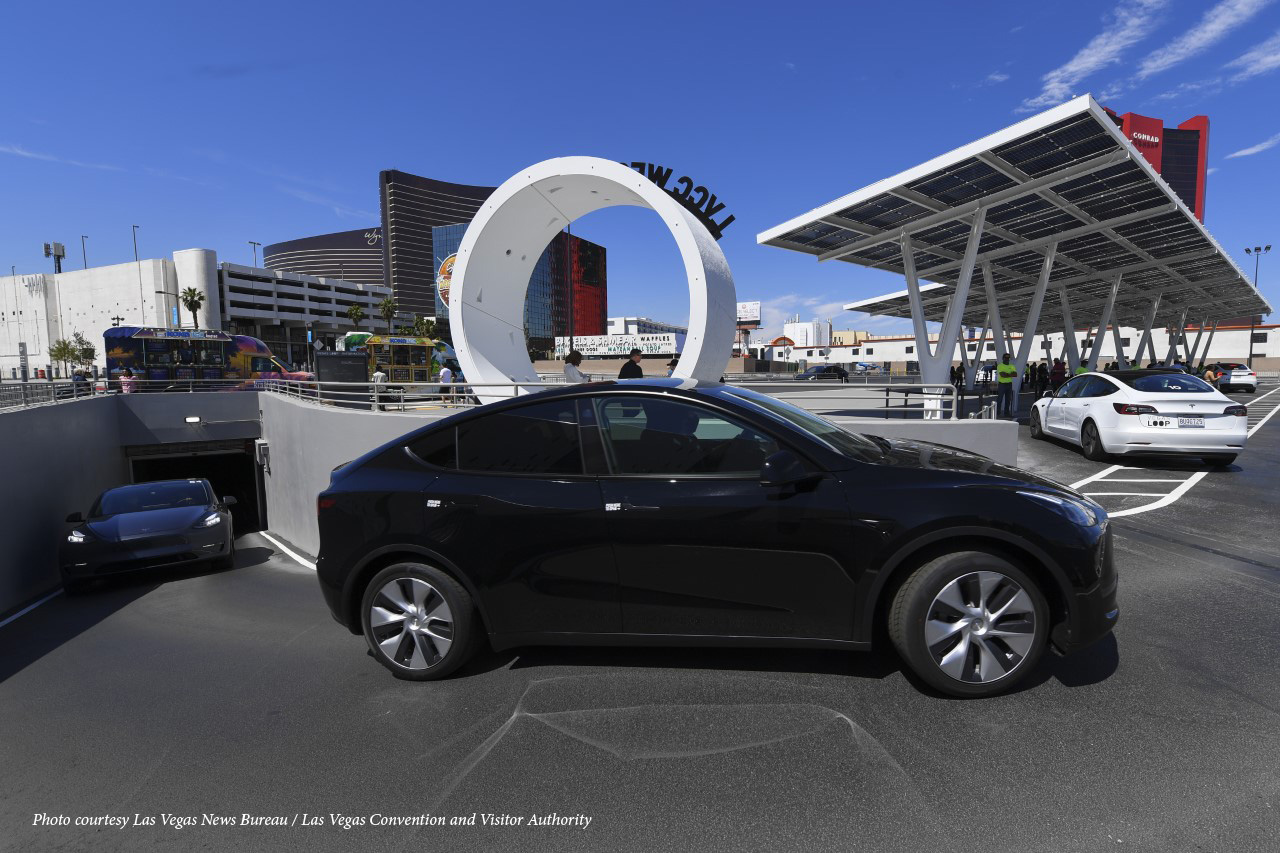 The Vegas Loop represents the first-of-its-kind transportation solution for any city anywhere in the world – and for a tourism destination, such as ours, it not only offers convenient transportation and reduced congestion throughout the resort corridor, it also adds another level of world class stature for all of Las Vegas.

“For many years, we’ve talked about how having options for meeting our tourist and resident transportation demands… to get to/from their destination… is so important,” notes Mike Jansen, City of Las Vegas Executive Director of Infrastructure. “Now, with this project, we see the Vegas Loop as a great opportunity to free up traffic capacity on the surface level.”

Clark County Commission Chairman Jim Gibson, who also serves on the board of the Las Vegas Convention and Visitors Authority, agrees, “The Vegas Loop is an exciting development for the Las Vegas Strip and the resort corridor.”

“Hundreds of thousands of rides have already been enjoyed by convention-goers to date… and there will be many more as the system expands,” Gibson observes. “There will also be fewer cars on our surface streets, which is significant for reducing traffic congestion and improving air quality.”

“Local taxpayers will benefit in that the system is privately financed, as well,” he adds. “As the Vegas Loop expands and matures, there will be more users and will soon see the safe use of autonomous cars and larger vehicles operating in its tunnels.”

On that last point, 700 to 1,000 Tesla automobiles will initially have drivers that will then give way to autonomous self-driven models. Over time, larger multi-passenger electric vehicles will also travel the underground highway system.

“These are all things worth celebrating,” Gibson concludes. 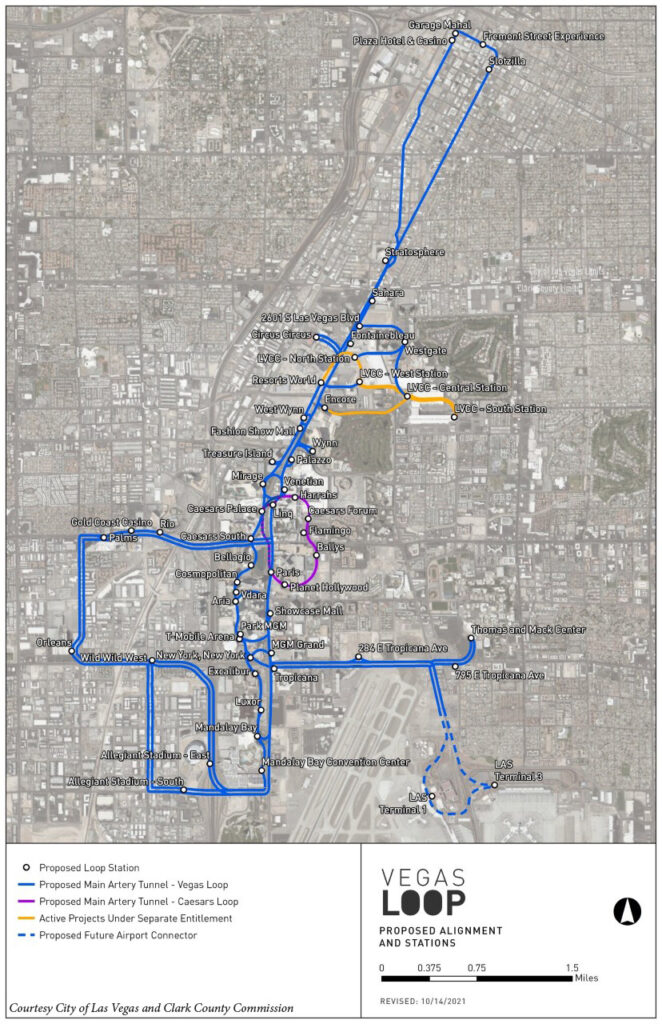 The Vegas Loop is a reality and is expected to begin phased-in construction in 2023 with anticipated completion within the next three- to five-years.

In short order, you will be able to zoom from the Las Convention Center to Harry Reid airport non-stop in a matter of five minutes for an estimated $5.00… or from Fremont Street to the airport in eight or nine minutes for $12… and to many other locations around the city through the network of underground tunnels just as easily and economically.

You’ll also have cell phone service and Wi-Fi connectivity and – should at some point – the existing system reach transport and passenger capacity, Musk states additional tunnels could easily be dug in as many layers as needed, 40- to 50-feet deeper apart.

But for Musk and City Planners, the Vegas Loop is just the beginning. Projects are already on the drawing board to have numerous tunnels running to other locations and cities throughout the Las Vegas Valley, such as Henderson, Summerlin and Pahrump.

While Las Vegas and its Loop are poised to be the flagship model city for futuristic transportation, if successful, it seems there is no end to the possibilities that lie ahead – both for the nation and the world. 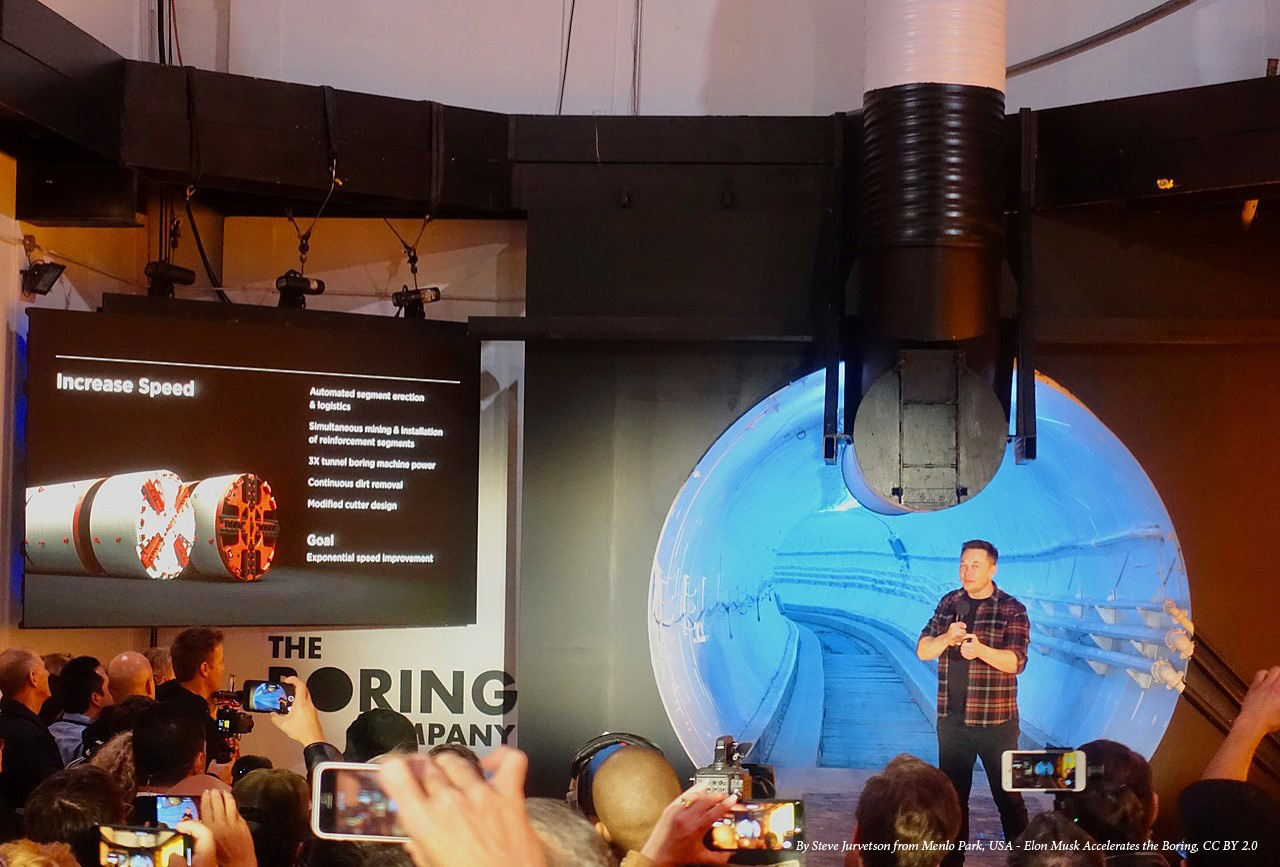 In December 2016, Musk tweeted: “Traffic is driving me nuts. I am going to build a tunnel boring machine and just start digging.” Within six months, he formed The Boring Company and began test tunneling in the SpaceX parking lot in Hawthorne, California.

Today, Musk is even contemplating a high-speed underground tunnel highway for the 270 miles from Las Vegas to Los Angeles… and another 381-mile segment between LA and San Francisco… then on, as a viable traffic solution for any number of other major cities, such as New York, Chicago, Miami and the Dallas/Fort Worth Metroplex, to name but a few. Famed European locales, such as Paris and London, are also in his sights.

If all this were not enough, Musk’s parent company SpaceX and its subsidiary – The Boring Company – are also teaming up to realistically envision the colonization of Mars populated with vast underground cities.

Crazy? Maybe not. Keep that in mind in the days ahead… as you fasten your seatbelt for a George Jetson-worthy speedy underground trip to Fremont Street.

The countdown officially began on November 15, 2019, when a huge earth moving machine fired up in a parking lot just off the Las Vegas “Strip” to begin digging Musk’s revolutionary concept that will soon serve all of Las Vegas and, quite possibly, will extend to a universe far, far away.

We are in the pioneering mode… and simply along for the ride.