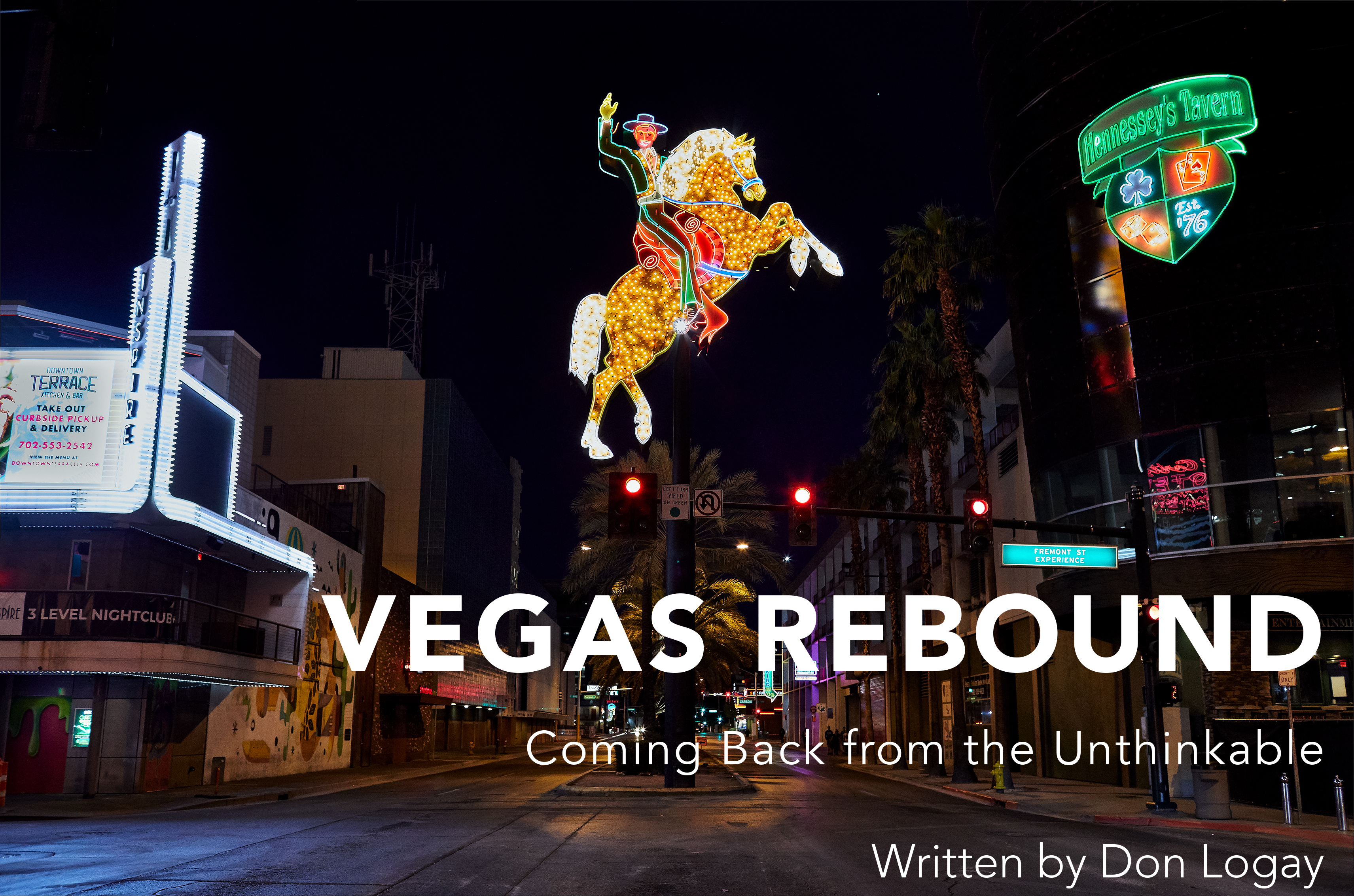 March 16, 2020 was a classic Las Vegas day… 68° and sunny… and the weatherman predicted more of the same in the days ahead. While dark “news clouds” were forming on the horizon, no one really foresaw the storm that was coming.

That evening, I went to dinner at Palace Station Casino with a friend. We dined and, as usual, gambled for a while afterword. Nothing seemed out of the ordinary.

However, earlier that day, I had spoken with my news-savvy cousin from Florida, who had been following the growing concerns over COVID-19 –  a mysterious virus that was taking hold – and the impact it was having on many cities nationwide.

In this particular conversation, he closed with an ominous comment, “If Vegas shuts down… we’ve got a real problem.”

Little did he know how prophetic his observation would be.

On March 5th, the first case of COVID-19 was reported in Nevada, On the 10th, MGM resorts closed all its buffets. Gov. Sisolak declared a “State of Emergency” on the 12th and all NHL and NBA games were suspended. On the 15th, Wynn closed its casinos and one after another, the dominoes were falling.

The following day, on March 18th as ordered, all non-essential businesses, bars, restaurants and 440 Nevada casinos closed their doors.

It was the first time the famed Las Vegas Strip had been totally shut down in 57 years – since the funeral of president John F. Kennedy in 1963. Only this time, it would be for more than just a single dark and unimaginable day.

Adding to the confusion and concerns, on March 24th personal social restrictions soon followed and on April 1st, there was a firm “stay at home order.” Vegas truly was on lockdown.

From Sahara avenue to the North and the “Welcome to Las Vegas” sign to the South, the 4.2 miles of Las Vegas famed casinos, resorts, restaurants and attractions were simply a desolate wind-swept stretch of darkened pavement.

It was an eerie sight, both day a night. Here and there a few curious locals came to witness this historic shutdown. It was the same Downtown on Fremont Street and in the nearby Arts District.

These were dark and uncertain days for all of Las Vegas… for businesses and citizens alike. We stayed at home, worked from home and wondered.

CLOSED BUT NOT FORGOTTEN

The news was not good. Overall, in Vegas alone, the pandemic resulted in an estimated $500 billion in losses and unemployment soared. More than one out of every three locals lost their jobs – more than in any major city in the country. Tourism and conventions, the traditional lifeblood of Las Vegas, also totally evaporated.

However, as dire as all of this seemed, a host of smart developers and seasoned investors chose to look past the immediate bad news and – in reality and as a result – “their” Las Vegas did not shut down at all.

While Strip casinos were shuttered, the pace and construction of projects (both new and in-the-works) actually speeded-up, allowing great progress for some and much earlier-than-planned openings for others.

Big Deals were also being made. 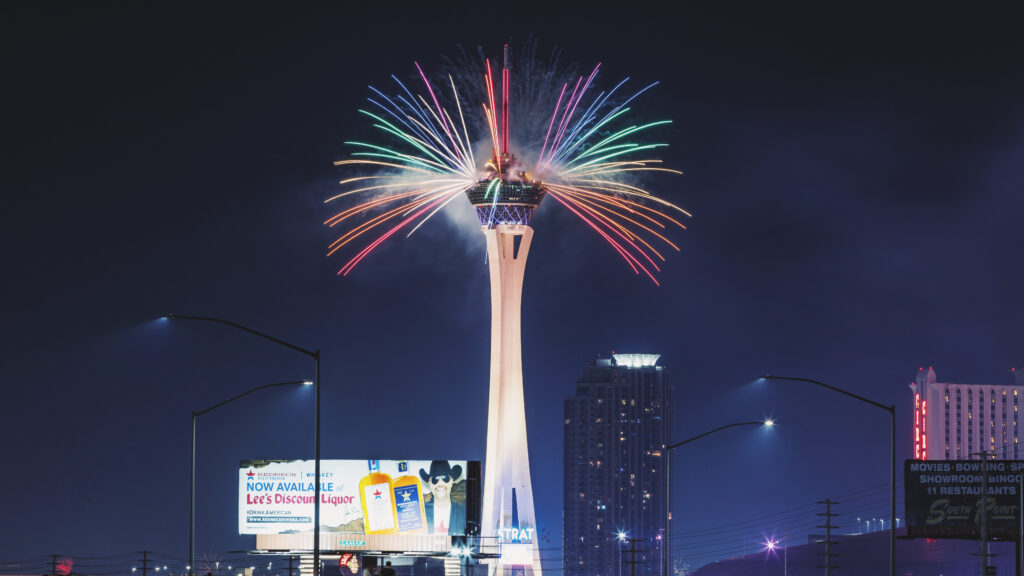 When Las Vegas tentatively reopened at 12:01 am on June 4, 2020, casinos were permitted to resume gaming and most businesses, such as dine-in restaurants, retail shops, salons and even bars, resumed operation… but with many restrictions.

Masks were required with 6-foot social distancing. Digital temperatures were taken upon entering casinos (more than 104° was a no-no), players at slot machines and tables were spread out and clear plastic partitions protected us from each other. Las Vegas was open and a glimmer of hope (and fun) resumed. Hotel rooms were also super-cheap and Las Vegas began to slowly come back to life.

Meanwhile, there were two major beneficiaries that emerged for those choosing to “stay the course.” First was Circa Resort and Casino that opened downtown in October 2020… the area’s first new ground-up mega-resort constructed since 1980… with 777 rooms, great restaurants, a huge casino and sportsbook with a spectacular world-class multi-level pool and the longest outdoor bar on Fremont Street. An immediate success.

Not to be outdone, the massive Resorts World – located at the North end of the Strip on the site of the former Stardust – opened just seven months later, on June 24, 2021, as the first completely new mega-resort on the famous boulevard in over a decade. On its 5.5-acre spread, there are three Hilton Hotels, a massive gaming floor, dozens of restaurants and seven luxurious pools (commanding the largest pool deck Vegas). It too was an resounding success.

At the North End of the Strip, and also during the Strip’s “down time,” the City of Las Vegas erected an 80-foot arch over Las Vegas Boulevard (near the Stratosphere) as a welcoming gateway to downtown Fremont Street and the burgeoning Arts District.

Another massive completion during this time was the $2 billion 65,000 seat Allegiant Stadium that opened on July 31, 2020. Located at the South end of the Strip – on 62 acres – it officially signaled another new day for Las Vegas.

On the heels of the Las Vegas Golden Knights Hockey team (that plays at T-Mobile Arena on the Strip) and other nearby new sports facilities – like the super-modern Las Vegas Ballpark in Summerlin – the new stadium also sparked interest in other pro teams possibly relocating to Las Vegas… such as the Oakland A’s for baseball and rumors of pro basketball coming shortly thereafter.

There are projects still underway and nearing completion as well, such as the $1.8 billion 17,500 seat MSG (Madison Square Garden) Sphere music and entertainment arena… and the $4 billion planned All-Net Arena and Resort headed by basketball star Jackie Robinson (construction is slated to begin in October 2021). Both are at the North end of the Strip.

In addition to tourism (and closely related), are the massive revenues generated by the attendees of meetings and conventions that are again returning to Las Vegas.

Many will be located in the newly expanded Las Vegas Convention Center. A brand new third 1.4 million square foot “West Wing” addition, completed in 2021– just off Las Vegas Boulevard on the site of the old Riviera Hotel – brings the square footage of exhibit space to a whopping 2.5 million square feet and 4.6 million of space overall.

In keeping with its reputation as a world-class convention facility, construction of an underground people mover loop (by Elan Musk’s Boring Company) beneath the LVCC also took place during the Strip’s downtime. At a cost of $53 million, twin tunnels 40-feet below the surface reduce walking time by whisking passengers between the three exhibit halls in high-speed human-driven Tesla vehicles (tomorrow to be self-driven), with long-term plans to expand the tunnel system both North and South… to downtown and the airport. The monorail is also planned to resume operation in the near future.

Many other convention and meeting facilities were also built and/or remodeled during the shutdown including those by Caesars, MGM and Wynn to mention but a few – bringing the total Vegas Valley available space for conventions, meetings and exhibits well into the tens of millions of square feet.

There were numerous sales, renovations and Vegas “firsts” as well. Indian Tribes made entry to Vegas Casinos, with the Mohegan Sun tribe operating the former Hard Rock as the new Virgin Casino Hotel – and as the first Native-American gaming operator in the city. Shortly afterward, San Manuel Band of Mission Indians tribe bought the Palms Casino Resort from Station Casinos for $650 million and the Seminole Tribe of Florida has expressed interest in making its presence felt on the Strip. 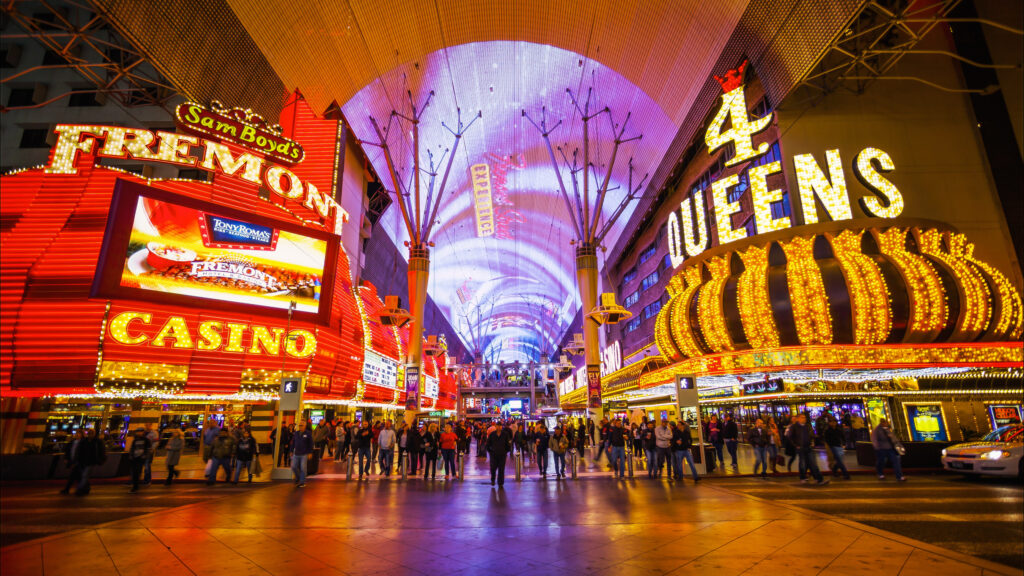 The American Gaming Association (AGA) reported that casinos were back even before Las Vegas fully opened, surprisingly matching their best quarter ever in the first three months of 2021. In March alone, Nevada casinos took in $1 billion in winnings for the first time since February 2020.

According to major travel booking sites, today Las Vegas is one of 2021’s most popular travel destinations and tourism numbers continue to soar. McCarran Airport served nearly 2.6 million passengers in March. In the first four months of 2021, there were 7.638 million visitors and in June 2021 alone that number grew by over 2.9 million.

Conventions are back, big entertainment shows and large special events are here again, and experts say “This rebound is unlike anything we’ve ever seen before.”

But is this all behind us as we hope? Troubling issues like the new Delta Variant virus still linger about… creating new pockets of concern and possible setbacks in spite of widespread vaccinations.

And while we forge ahead… in a world filled with renewed hope and cautious optimism… two famous quotes from the Godfather movies come to mind that summarize the status du jour.

First is by Michael Corleone… voiced in Godfather III… who stated our concerns of the day: “Just when you think you’re out… they pull you back in.”

But Vegas is tough and determined… and it also recalls the resolve of Don Vito Corleone in the original Godfather film: “We’re gonna make ‘em an offer they can’t refuse.”

Let there be no doubt… Vegas is back… and back with a vengeance.